The DATA Act called on federal agencies to increase the transparency of roughly $3.7 trillion in annual spending by improving the quality of data available to Congress, federal managers, and the public.

We found that budget data were largely consistent with agency records; however, only between 0 to 1 percent of award records (e.g., grants, contracts, and loans) were fully consistent. Additionally, some submissions were incomplete and agencies applied data standards differently. OMB and Treasury agreed with our six recommendations to clarify guidance, help ensure data submissions are complete, and disclose data quality issues. 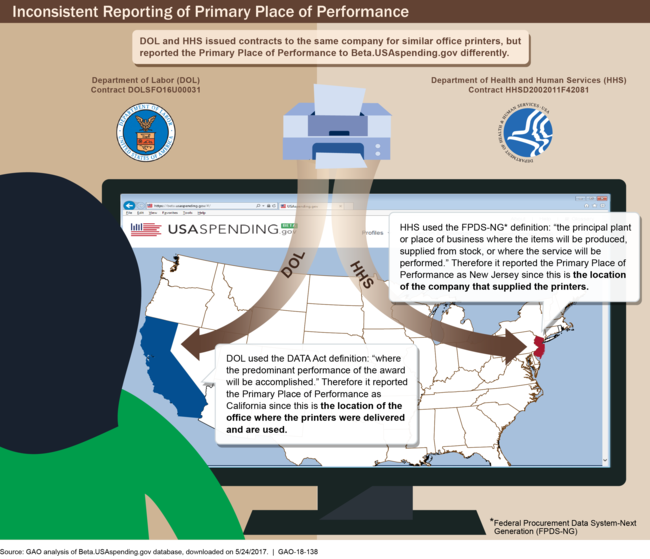 One agency reported the company's location for "Primary Place of Performance," while the other reported the delivery address.

A total of 78 federal agencies, including all 24 Chief Financial Officers (CFO) Act agencies, submitted data by May 2017, as required by the Digital Accountability and Transparency Act of 2014 (DATA Act). However, GAO identified issues and challenges with the completeness and accuracy of the data submitted, use of data elements, and presentation of the data on Beta.USAspending.gov.

Completeness: Awards for 160 financial assistance programs with estimated annual spending of $80.8 billion were omitted from the data for the second quarter of fiscal year 2017. Also, 13 agencies, including the Departments of Defense and Agriculture, submitted the file intended to link budgetary and award information without providing any data. The Office of Management and Budget (OMB) provided technical assistance to help agencies determine whether they are required to report under the act, but not all agencies had made that determination by the May 2017 reporting deadline. As a result of these issues, OMB and the Department of the Treasury (Treasury) cannot reasonably assure that subsequent data submissions will be complete.

Use: GAO also identified challenges in the implementation and use of two data elements— Primary Place of Performance and Award Description —that are particularly important to achieving the DATA Act's transparency goals. GAO found that agencies differ in how they interpret and apply OMB's definitions for these data elements, raising concerns regarding data consistency and comparability. These findings underscore the need for clarified guidance and improved data governance.

Presentation: Treasury provides feedback mechanisms to users on Beta.USAspending.gov, and plans to address known website search functionality issues. However, Treasury does not sufficiently disclose known limitations affecting data quality. The website is under continuing development and disclosing limitations will be essential in the fall of 2017 when, according to Treasury, the previous version of USAspending.gov will be retired and the new version becomes the sole available source of certified agency data submitted under the DATA Act.

The DATA Act requires agencies to increase the types and transparency of over $3.7 trillion in annual federal spending data, and requires OMB and Treasury to establish data standards to enable the reporting and tracking of agency spending. Consistent with GAO's mandate under the act, this assessment is GAO's first review of the quality of the data collected under the act that agencies reported beginning in May 2017 and made available through Beta.USAspending.gov, a website currently under development by Treasury.

Specifically, this report examines (1) the completeness, timeliness, accuracy and quality of the data and use of data standards; and (2) the consistency of the Beta.USAspending.gov website with selected standards for federal websites. GAO analyzed a sample of second quarter fiscal year 2017 data, projectable to the 24 CFO Act agencies, from a database that populates Beta.USAspending.gov and traced them back to agency source records. GAO also compared the data and functionality of this website with selected federal website standards.

GAO makes two recommendations to OMB regarding technical assistance and clarifying guidance to help ensure agencies fully comply with DATA Act requirements and report data completely and accurately; and four recommendations to Treasury, including disclosing known data quality issues on its website. OMB and Treasury generally agreed with our recommendations.

Ten years ago this month, Congress responded to the most serious economic crisis since the Great...
Blog Post