For the 2020 Census, the Census Bureau originally planned to phase in technology and third-party data sources to build its address list—reducing the need to go door-to-door. The Bureau estimated it could update 75% of its address list this way, reducing costs by $900 million.

However, the Bureau has not evaluated the accuracy of its approach, which involves comparing aerial images to data in the master address list. It also suspended the operation's second phase—resolving mismatches—without detailing the cost, value, or accuracy of the new approach.

We made 3 recommendations to help the Bureau tackle these issues prior to the 2020 Census. 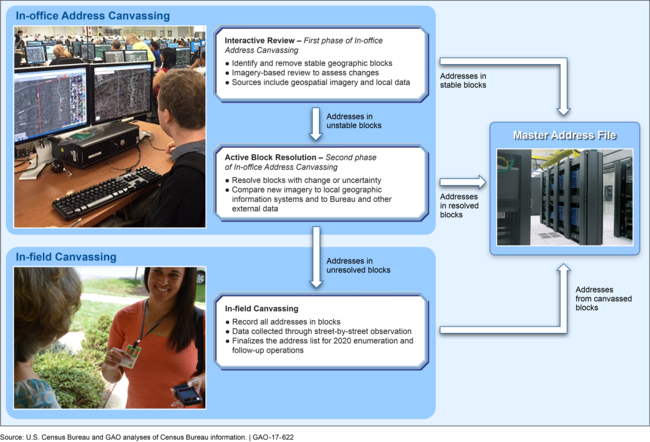 To achieve cost savings, the Census Bureau (Bureau) decided in September 2014 to use a reengineered approach for building its address list for the 2020 Census without having to go door-to-door (or “in-field”) across the country, as it has in prior decennial censuses. Rather, some areas (known as “blocks”) might only need a review of their address and map information using computer imagery and third-party data sources – what the Bureau calls “in-office” procedures. The Bureau planned to use a two-phase, in-office address canvassing operation to update 75 percent of all housing units in its master address list, and initially estimated this approach could reduce 2020 Census costs by $900 million.

GAO has previously reported on the need for the Bureau to rethink its approach to testing and evaluating the census. The Bureau agreed, and its early plans called for the use of incremental, small-scale testing throughout the decade. As the Bureau begins planning for future census operations, small-scale testing by the Bureau may be less susceptible to budgetary constraints and allow it to better demonstrate the effectiveness of its operational innovations.

The Bureau manages the day-to-day production of in-office address canvassing using measures that do not fully reflect the effectiveness of the approach in reducing fieldwork. For example, the Bureau regularly tracks the number of blocks for which it has conducted an initial round of review. However, the workload the Bureau identifies as completed includes blocks that have been put on hold and that await availability of better information before being reviewed again. Other assumptions about how quickly the workflow proceeds have not been met. In testing the Bureau's productivity assumptions using actual production data through March 2017, GAO found that even small differences in measurement can have significant impacts on estimates of the remaining workload and the time to complete it. Without measuring how much in-office work is truly completed and how much fieldwork has been reduced, the Bureau risks underestimating the time and resources needed to complete the in-office operation, and may require more in-field address canvassing—at greater costs—than the Bureau currently projects.

With a lifecycle cost of $12.3 billion (in 2020 dollars), the 2010 Census was the most expensive in U.S. history. Reengineering how the Bureau builds its address list is one of the ways the Bureau intends to reduce the per–housing unit cost of the 2020 count.

GAO recommends that the Bureau (1) use its remaining evaluations before 2020 to determine cost and quality implications and to justify future decisions for its reengineered approach; (2) plan and execute smaller, more flexible tests needed to support key address canvassing design decisions in future census operations; and (3) use productivity measures that track the progress of the in-office address canvassing and its effectiveness in reducing fieldwork. The Department of Commerce had no disagreements with GAO's findings and recommendations. In addition, the Secretary noted that the Department was conducting its own review.