For years we've reported on the F-35 program's cost and schedule overruns, knowledge gaps, and performance issues. Although DOD has taken a number of steps to address these concerns, the department continues to struggle to keep the development costs for the baseline aircraft in check—raising questions about DOD's plan to make significant investments in developing new F-35 capabilities.

Our recommendation? Before committing dollars to future F-35 capabilities, DOD should complete development of the baseline aircraft. 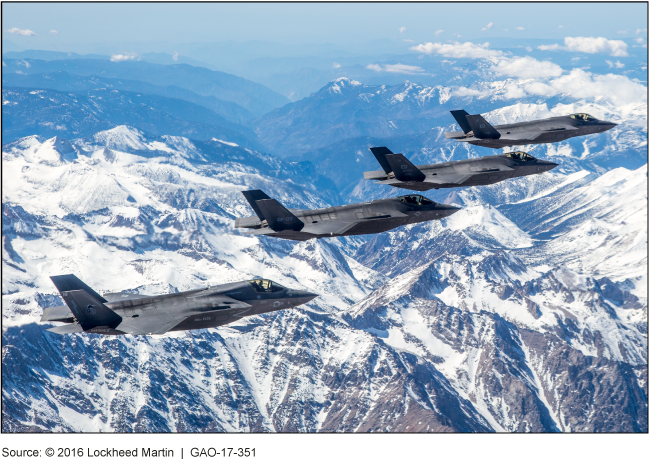 Photo of four F-35s in flight.

Cascading F-35 testing delays could cost the Department of Defense (DOD) over a billion dollars more than currently budgeted to complete development of the F-35 baseline program. Because of problems with the mission systems software, known as Block 3F, program officials optimistically estimate that the program will need an additional 5 months to complete developmental testing. According to best practices, credible estimates are rooted in historical data. The program's projections are based on anticipated test point achievements and not historical data. GAO's analysis—based on historical F-35 flight test data—indicates that developmental testing could take an additional 12 months (see table below). These delays could affect the start of the F-35's initial operational test and evaluation, postpone the Navy's initial operational capability, and delay the program's full rate production decision, currently planned for April 2019.

Program officials estimate that a delay of 5 months will contribute to a total increase of $532 million to complete development. The longer delay estimated by GAO will likely contribute to an increase of more than $1.7 billion, approximately $1.3 billion of which will be needed in fiscal year 2018.

Meanwhile, program officials project the program will need over $1.2 billion in fiscal year 2018 to start two efforts. First, DOD expects it will need over $600 million for follow-on modernization (known as Block 4). F-35 program officials plan to release a request for Block 4 development proposals nearly 1 year before GAO estimates that Block 3F—the last block of software for the F-35 baseline program—developmental testing will be completed. DOD policy and GAO best practices state that requirements should be approved and a sound business case formed before requesting development proposals from contractors. Until Block 3F testing is complete, DOD will not have the knowledge it needs to present a sound business case for Block 4. Second, the program may ask Congress for more than $650 million in fiscal year 2018 to procure economic order quantities—bulk quantities. However, as of January 2017 the details of this plan were unclear because DOD's 2018 budget was not final and negotiations with the contractors were ongoing. According to internal controls, agencies should communicate with Congress, otherwise it may not have the information it needs to make a fully informed budget decision for fiscal year 2018. Completing Block 3F development is essential for a sound business case and warrants funding priority over Block 4 and economic order quantities at this time.

The F-35 Joint Strike Fighter is DOD's most expensive and ambitious acquisition program. Acquisition costs alone are estimated at nearly $400 billion, and beginning in 2022, DOD expects to spend more than $14 billion a year on average for a decade.

The National Defense Authorization Act for Fiscal Year 2015 included a provision for GAO to review the F-35 acquisition program annually until the program reaches full-rate production. This, GAO's second report in response to that mandate, assesses, among other objectives, (1) progress of remaining program development and testing and (2) proposed future plans for acquisition investments. To conduct this work, GAO reviewed and analyzed management reports and historical test data; discussed key aspects of F-35 development with program management and contractor officials; and compared acquisition plans to DOD policy and GAO acquisition best practices.

GAO recommends that DOD use historical data to reassess the cost of completing development of Block 3F, complete Block 3F testing before soliciting contractor proposals for Block 4 development, and identify for Congress the cost and benefits associated with procuring economic order quantities of parts. DOD did not concur with the first two recommendations and partially concurred with the third while outlining actions to address it. GAO continues to believe its recommendations are valid, as discussed in the report.