In our annual Quick Look across its weapons programs, we found that DOD had made strides to address past inefficiencies. For example, certain programs increased their buying power by $10.7 billion—meaning more can be purchased for the same level of funding.

However, DOD is missing key opportunities to reduce cost by increasing competition. Also, despite our previous recommendations, most weapon programs we assessed are not yet fully following knowledge-based best practices—increasing risk for cost increases and delays. 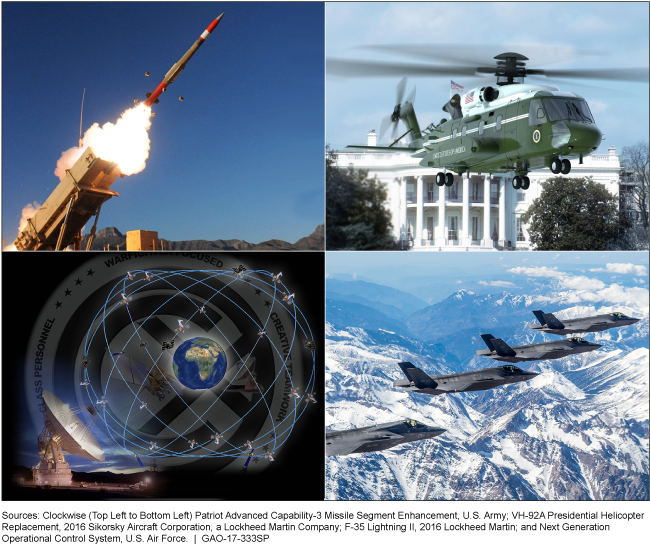 Since GAO's 2016 assessment, the number of programs in the Department of Defense's (DOD) portfolio of major defense acquisitions decreased from 79 to 78, while DOD's planned investment over the life of these programs increased by $9.4 billion to $1.46 trillion. GAO observed mixed performance in the portfolio this year. For example, although the current portfolio has incurred $484 billion in total cost growth, $476 billion of this occurred 5 or more years ago, indicating recent performance has improved. Yet, 60 percent of the total cost growth occurred after programs entered production, when costs should be more stable. However, the portfolio increased its buying power by $10.7 billion—meaning DOD is able to buy more goods or services for the same level of funding. This gain resulted from some programs finding procurement efficiencies that more than offset inefficiencies in other programs. The 19 newest programs decreased their costs by a combined $3.4 billion over the past year.

Implementation of key reform initiatives GAO analyzed for the 45 current and 9 future programs it assessed this year was similar or slightly less as compared to its 2016 assessment. These initiatives address program and portfolio affordability, cost growth controls, and competition use. For example, 42 programs this year reported conducting “should-cost” analyses, which are designed to reduce programs' costs by identifying and eliminating inefficiencies. Programs can take a variety of actions, such as reducing overhead, to do so. Programs implementing “should-cost” analyses reported realizing $23.6 billion in savings, although they could not identify to GAO exactly where $11.0 billion of these savings were transferred within DOD. Also, a similar number of programs reported establishing affordability constraints, which programs use to set priorities and inform what they can and cannot afford. GAO found that current programs with established affordability constraints had a lower average amount of cost growth from initial estimates compared to programs without a constraint. However, DOD's implementation of another key reform initiative—the fostering of competitive environments in acquisition—is stagnant. Compared to GAO's 2016 assessment, more programs this year reported having no plans for competition before or after development start. Lastly, 31 current programs reported that they are scheduled to complete the evaluation of their potential cyber vulnerabilities by 2019, required by the 2016 fiscal year National Defense Authorization Act.

Most of the programs GAO assessed this year are not yet fully following a knowledge-based acquisition approach, as GAO has previously recommended. This held true for the four programs that recently entered system development as only one completed all of the applicable GAO criteria for a best practices approach. Three of the four implemented some knowledge-based practices, such as completing a system-level preliminary design review before development start. Meanwhile, other practices, such as fully maturing technologies prior to system development start and completing systems engineering reviews, were not fully implemented. As a result, these programs will carry unwanted risk into subsequent phases of acquisition that could result in cost growth or schedule delays. In addition, a number of programs are concurrently conducting software and hardware development during production, further exposing programs to undue cost and schedule risk.

This is GAO's annual assessment of DOD's major weapon system acquisitions, an area on GAO's high-risk list. DOD and Congress have taken steps to improve the acquisition of weapon systems. Still some programs continue to experience cost and schedule overruns. GAO continues to emphasize the need for DOD and Congress to hold programs accountable by ensuring that they attain the required knowledge at key decision points before committing resources to development. Given continuing budgetary pressures, DOD cannot afford to miss opportunities to address program inefficiencies.

The joint explanatory statement to the DOD Appropriations Act, 2009 includes a provision for GAO to annually review DOD's portfolio of weapon systems. This report includes observations on (1) the cost and schedule performance of DOD's 2016 portfolio of 78 major defense acquisition programs, (2) program implementation of key acquisition reform initiatives, and (3) the knowledge attained at key decision points for 54 weapon programs in development or early production.

GAO analyzed cost, schedule, and quantity data from DOD's Selected Acquisition Reports from 2010, 2014, and 2015. GAO also collected program office data through two questionnaires on technology, design, and manufacturing knowledge; the use of knowledge-based acquisition practices; and the implementation of acquisition reforms and initiatives.

In commenting on a draft of this report, DOD agreed with GAO's findings and stated that the results validate its focus on continuous program improvements.