The Navy buys ships using a certain contract type that outlines how it will share the burden of unexpected costs with shipbuilders, while also giving them additional money for constructing ships efficiently.

However, in the 6 contracts we reviewed, we found the Navy bore the majority of additional costs. Plus, the contracts included $700 million in extra incentives for things that shipbuilders should have been doing anyway. Shipbuilders could get these incentives even if they delivered ships late and above cost.

We made recommendations to help the Navy evaluate its contracts, and study the effect of extra incentives in such contracts. 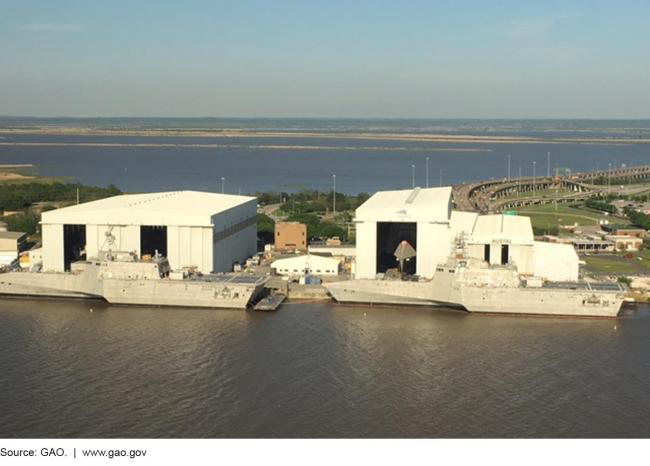 Over 80 percent of the Navy's shipbuilding contracts awarded over the past 10 years were fixed-price incentive (FPI). However, GAO found that half of the six selected contracts it reviewed did not document the Navy's justification for selecting this contract type. Moreover, key documents that should describe the rationale for selecting contract elements varied across these contracts. Given the Navy's plans to invest billions of dollars in shipbuilding programs in the future, without adequate documentation on the rationale for use of an FPI contract and key decisions made about FPI contract elements, contracting officers will not have the information they need to make sound decisions at the negotiation table.

Department of Defense (DOD) regulation suggests, as a point of departure for contract negotiations, that the government and shipbuilders share the cost risk equally and set a ceiling price 20 percent higher than the negotiated target cost. GAO found that, for most of the 40 ships on the contracts reviewed, these contract terms resulted in the Navy absorbing more cost risk, as shown below.

Many factors inform the Navy's and shipbuilder's negotiation positions, including the stability of the supplier base and extent of competition. That said, guidance states that the FPI contract elements should be the primary incentive for motivating the shipbuilder to control costs. But GAO found that in five of the six contracts, the Navy added over $700 million in incentives.

Of the 11 ships delivered as of December 2015 under the six contracts, 8 experienced cost growth. In one case, costs grew nearly 45 percent higher than the negotiated target cost. Further, it is unclear whether the additional incentives achieved intended cost and schedule outcomes, as GAO found a mixed picture among the contracts reviewed. Regulation, while not prescriptive, highlights the benefits of measuring the effectiveness of incentives. According to a senior Navy contracting official, the Navy has not measured incentive outcomes for its shipbuilding portfolio. Without assessing whether adding incentives is effective in improving shipbuilder performance, the Navy is missing an opportunity to better inform decisions about whether to include additional incentives in future awards.

DOD encourages the use of FPI contracts because they allow for equitable sharing of costs savings and risk with the shipbuilder. Under FPI contracts, the shipbuilder's ability to earn a profit or a fee is tied to performance. After costs reach the agreed upon target cost, the shipbuilder's profit decreases in relation to the increasing costs. A ceiling price fixes the government's maximum liability.

A House Report on the Fiscal Year 2014 National Defense Authorization Act included a provision for GAO to examine the Navy's use of FPI contracts for shipbuilding. This report examines (1) the extent to which the Navy has entered into FPI contracts over the past 10 years, (2) how FPI contracts apportion risk between the Navy and the shipbuilder, and (3) the extent to which FPI contracts led to desired cost outcomes. GAO selected a non-generalizable sample of six contracts (for 40 ships) awarded during the past 10 years, analyzed Navy contract documents, and interviewed program, contract, and shipbuilding officials. This is the public version of a sensitive but unclassified report issued in November 2016.

For shipbuilding contract awards, the Navy should (1) document in the contract file its rationale for selecting an FPI contract and the basis for contract elements and (2) conduct a portfolio-wide assessment of its use of additional incentives on FPI contracts across its shipbuilding programs. DOD agreed with GAO's recommendations and stated that actions will be taken in 2017 to address them.