Over the past year, the number of programs in the Department of Defense's (DOD) portfolio of major defense acquisitions increased from 78 to 79, while DOD's total planned investment in these programs decreased from $1.45 trillion to $1.44 trillion. This estimate is in line with a trend seen since 2010 of decreases in the portfolio's total acquisition cost. The portfolio's cost growth since first full estimates has been substantial, but most of the cost growth occurred 5 or more years ago. The average time to deliver initial capability to the warfighter also increased by 2.4 months. This increase is due in part to the significant delays experienced by a few programs. In addition, while more programs in the 2015 portfolio reported cost increases than decreases the net change resulted in a decrease in the portfolio's total cost over the past year. 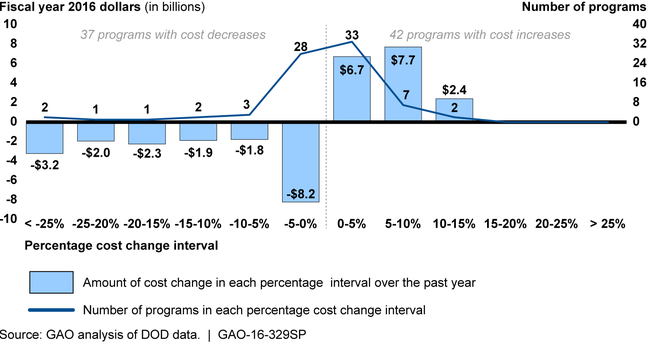 Most of the 43 programs GAO assessed this year are not yet fully following a knowledge-based acquisition approach, as GAO recommended. This held true for the 7 programs that recently entered system development as none completed all of our criteria for a best practices approach. Each of the 7 implemented some knowledge based practices—such as constraining the period for development—but other practices—such as fully maturing technologies prior to system development start and completing systems engineering reviews—were not fully implemented. As a result, these programs will carry unwanted risk into subsequent phases of acquisition that could result in cost growth or schedule delays.

Implementation of the reform initiatives GAO analyzed varies for the 43 programs assessed above as well as the 12 assessed that will become programs in the future. Programs are implementing acquisition reform initiatives—such as the use of affordability constraints and “should cost” analysis—and have realized $21 billion in savings as a result. However, there has been a decrease in the number of programs with acquisition strategies that include competition. In addition, a number of programs are concurrently conducting both software and hardware development during production, exposing programs to undue cost and schedule risk.

This is GAO's annual assessment of DOD major weapon system acquisitions, an area on GAO's high-risk list. DOD and Congress have taken meaningful steps to improve the acquisition of major weapon systems, yet programs continue to experience cost and schedule overruns. Further, GAO has emphasized the need to sustain the implementation of acquisition reforms and for programs to complete developmental testing before beginning production, thereby avoiding concurrency and its associated cost and schedule growth. With the continuing budgetary pressures, DOD cannot afford to miss opportunities to address inefficiencies in these programs to free up resources for higher priority needs.

The joint explanatory statement to the DOD Appropriations Act, 2009 includes a provision for GAO to annually review DOD's portfolio of weapon systems. This report includes observations on (1) the cost and schedule performance of DOD's 2015 portfolio of 79 major defense acquisition programs; (2) the knowledge attained at key junctures in the acquisition process for 43 programs that were in development or early production; and (3) key acquisition reform initiatives and program concurrency. To develop the observations in this report, GAO analyzed cost, schedule, and quantity data from DOD's December 2014 Selected Acquisition Reports. GAO also collected data through two questionnaires to program offices on technology, design, and manufacturing knowledge; the use of knowledge-based acquisition practices; and the implementation of acquisition reforms and initiatives.

In commenting on a draft of this report DOD agreed with our findings and noted that our results appear to validate DOD's focus on continuous improvements.