GAO's analysis of subject matter specialists' comments, related literature, and interviews with Office of Personnel Management (OPM) officials identified a number of important characteristics for a modern, effective classification system, which GAO consolidated into eight key attributes (see table below). GAO's analysis shows that in concept the current General Schedule (GS) classification system's design incorporates several key attributes including internal and external equity, transparency, simplicity, and rank in position. However, as OPM implemented the system, the attributes of transparency, internal equity, simplicity, flexibility, and adaptability are reduced. This occurs, in part, because some attributes are at odds with one another so fully achieving one attribute comes at the expense of another. Thus, OPM, working with its stakeholders, is challenged to determine how best to optimize each attribute.

While the GS system's standardized set of 420 occupations, grouped in 23 occupational familes, and statutorily-defined 15 grade level system incorporates several key attributes, it falls short in implementation. For example, the occupational standard for an information technology specialist clearly describes the routine duties, tasks, and experience required for the position. This kind of information is published for the 420 occupations, so all agencies are using the same, consistent standards when classifying positions—embodying the attributes of transparency and internal equity. However, in implementation, having numerous, narrowly-defined occupational standards inhibits the system's ability to optimize these attributes. Specifically, classifying occupations and developing position descriptions in the GS system requires officials to maintain an understanding of the individual position and the nuances between similar occupations. Without this understanding, the transparency and internal equity of the system may be inhibited, as agency officials may not be classifying positions consistently, comparable employees may not be treated equitably, and the system may seem unpredictable. Several studies have concluded that the GS system was not meeting the needs of the modern federal workforce or supporting agency missions, and some studies suggested reductions in the number of occupational series and grade levels to help simplify the system. In addition, over the years agencies have sought exceptions to the GS system to mitigate some of its limitations either through demonstration projects or congressionally-authorized alternative personnel systems—often featuring a broadband approach that provided fewer, broader occupational groups and grade levels. By using lessons learned and the results from prior studies to examine ways to make the GS system more consistent with the attributes of a modern, effective classification system, OPM could better position itself to help ensure that the system is keeping pace with the government's evolving requirements.

Occupational Families with the Greatest Change in Use of Alternative Systems, 1988-2013 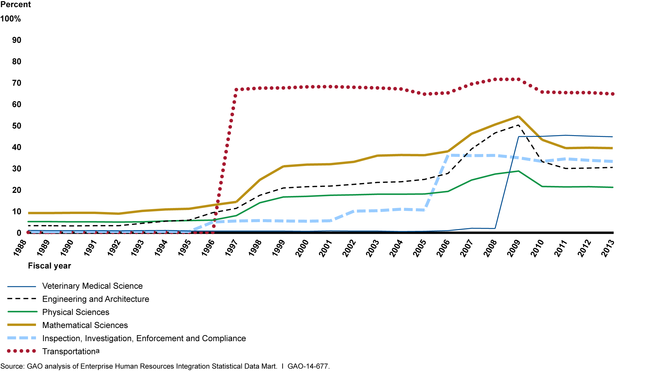 OPM is responsible for establishing new—and revising existing—occupational standards after consulting with agencies. From 2003 to 2014, OPM established 14 new occupational standards and revised almost 20 percent of the occupational standards. However, there was no published review or update of 124 occupations since 1990. OPM officials said they first review occupations identified in presidential memorandums as needing review; however OPM does not systemically track and prioritize the remaining occupational standards for review. Therefore, OPM has limited assurance that it is updating the highest priority occupations. Further, OPM is required by law to oversee agencies' implementation of the GS system. However, OPM officials said OPM has not reviewed any agency's classification program since the 1980s because OPM leadership at the time concluded the reviews were ineffective and time consuming. As a result, OPM has limited assurance that agencies are correctly classifying positions according to standards.

This report examined: (1) the attributes of a modern, effective classification system and how the GS system compares with the modern systems' attributes; (2) trends in agencies and occupations covered by the GS system and the pay difference for selected alternative systems; and (3) OPM's administration and oversight of the GS system. GAO analyzed personnel data from 1988 to 2013, conducted a literature review, compared legislation to OPM procedures, and interviewed subject matter specialists and OPM officials, selected to represent public policy groups, government employee unions, and academia, among others.

GAO recommends that the Director of OPM (1) work with stakeholders to examine ways to modernize the classification system, (2) develop a strategy to track and prioritize occupations for review and updates, and (3) develop cost-effective methods to ensure agencies are classifying correctly. OPM partially concurred with the first and third recommendation but did not concur with the second recommendation. OPM stated it already tracks and prioritizes occupations for updates. However, OPM did not provide documentation of its actions. GAO maintains that OPM should implement this action.