The USS Freedom deployment provided beneficial data on operational support and sustainment concepts for the Littoral Combat Ship (LCS), but these data have limitations, and the Navy still lacks key data on LCS ships and concepts. The USS Freedom deployed for 10 months with a surface-warfare mission package, and the Navy collected data on items such as systems reliability and crew sleep hours. However, several factors limited the operational lessons learned. For example, mechanical problems prevented the ship from spending as much time at sea as planned. Further, the Navy continues to lack operational data for key operational and warfighting concepts, such as deployment with the other mission packages—mine countermeasures and antisubmarine warfare—and data on the other LCS variant which, under current plans, will comprise half the ship class.

Although the Navy is adjusting some operational support and sustainment concepts, it has not yet addressed risks that remain in executing key concepts.

Manning: The crew experienced high workload and fell short of the Navy's sleep standards despite adding personnel for the deployment.

Maintenance: The Navy is adjusting maintenance requirements and has not yet determined the optimal mix of contractor and crew workload to perform preventative maintenance.

Logistics: The Navy is reallocating duties among crew and shore support, but the infrastructure needed to support both variants is incomplete.

Without fully analyzing risks in key concepts, the LCS may have operational limitations, deficits in personnel and materiel readiness, and higher costs.

The Navy has produced life-cycle cost estimates for the LCS seaframes and mission modules. Although those estimates contain uncertainty and there are inherent difficulties in comparing the life-cycle costs of ships with differing capabilities and missions, the best available Navy data indicate that the annual per ship costs for LCS are nearing or may exceed those of other surface ships, including those with greater size and larger crews, such as frigates. 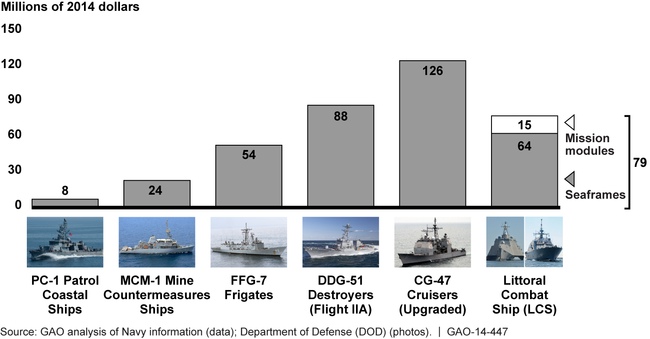 The LCS was intended to be a low-cost surface combatant that uses innovative operational concepts, such as minimal crew size, to lower operations and support costs. In 2013, the Navy deployed USS Freedom , one of two LCS variants, to Singapore to “prove its concept,” demonstrate operational capabilities, and collect data on the ship's manning, training, maintenance, and logistics needs.

The House report accompanying the National Defense Authorization Act for Fiscal Year 2014 mandated that GAO analyze the Navy's sustainment plans for its LCS program—including lessons from the USS Freedom deployment. This report addressed (1) the benefits and limitations of the operational data that have been collected on LCS ships; (2) the extent to which the Navy has evaluated risk in its operational support and sustainment concepts for LCS; and (3) how LCS life-cycle cost estimates compare with those for other surface-ship classes. GAO analyzed documents from the 2013 deployment, and LCS and surface-ship life-cycle costs, and interviewed program officials and USS Freedom crews.

GAO is emphasizing its prior recommendations that, before buying more LCS ships, the Navy (1) conduct and consider the results of a risk assessment and (2) collect additional data and update cost estimates. The Department of Defense expressed concerns that its life-cycle cost data are not comparable across ship types. GAO believes the analysis provides a reasonable comparison using the best available data from the Navy, as discussed in the report.