Of the 29 federal programs GAO reviewed (which accounted for about 86 percent of federal program spending for states or their residents in fiscal year 2010), statehood would likely affect 11 programs. For 3 other programs, while the programs themselves would likely not change under statehood, eligibility determinations for these programs could be affected indirectly by changes that could occur to benefits in other programs. Statehood would not likely affect the 15 remaining programs. See figure below. 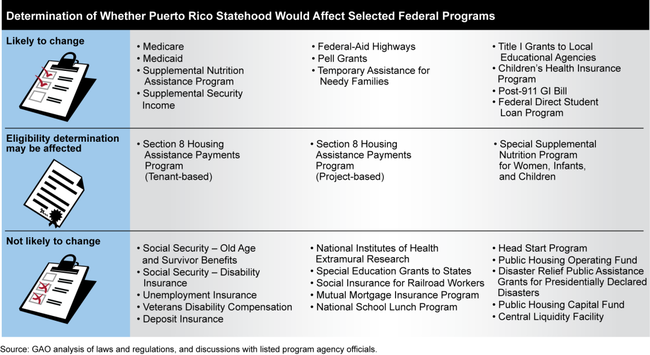 The extent to which federal spending would change for some of the programs affected by Puerto Rico statehood depends on various assumptions: these assumptions include the program eligibility options Puerto Rico might select or the rates at which eligible residents might participate in the programs. For example, for the four largest programs for which federal spending likely would change under statehood—Medicare, Medicaid, the Supplemental Nutrition Assistance Program (SNAP), and Supplemental Security Income (SSI)—GAO used various assumptions to estimate the range of potential effects on federal program spending. The estimated ranges for the four programs, as described below, are based on Puerto Rico being treated the same as the states in either 2010 or 2011, based on the year for which GAO had the most recent data.

Medicare: In fiscal year 2010, actual federal Medicare spending in Puerto Rico was $4.5 billion; if Puerto Rico had been a state in calendar year 2010, estimated federal spending would have ranged from $4.5 billion to $6.0 billion. The Medicare estimates take into account certain changes under the Patient Protection and Affordable Care Act occurring after 2010 that would reduce spending. Also, the Medicare estimates depend on the estimates for Medicaid, as some individuals are eligible for both programs.

Medicaid: In fiscal year 2011, actual federal Medicaid spending in Puerto Rico was $685 million; if Puerto Rico had been a state in calendar year 2011, estimated federal spending would have ranged from $1.1 billion to $2.1 billion. The Medicaid estimates do not take into account the cost of nursing home and home health services in Puerto Rico due to the lack of available cost data, and because Puerto Rico lacks an infrastructure of nursing home facilities, according to Centers for Medicare & Medicaid Services officials. If these services became available, Medicaid spending would likely increase.

SNAP: In fiscal year 2011, actual federal spending for a similar program in Puerto Rico was $1.9 billion; if Puerto Rico had been a state in calendar year 2011, residents would have been eligible for SNAP, and estimated federal spending would have ranged from $1.7 billion to $2.6 billion. One reason why the low end of the estimate range is less than actual spending is because participants' benefits would be reduced because of benefits received from SSI, for which Puerto Rico residents would newly qualify.

All the federal revenue sources GAO reviewed—individual and corporate income taxes, employment tax, excise tax, estate and gift taxes, and customs duties—could be affected if Puerto Rico became a state. For example, under statehood, Puerto Rico residents would be subject to federal tax on all their income: currently, they are subject to federal tax only on income from sources outside of Puerto Rico. Also, some sources of income, such as pension income, are taxed differently in Puerto Rico than in the states. As a result, for 2010, Puerto Rico filers' adjusted gross income for federal tax purposes would have been higher than that for Puerto Rico tax purposes. For some revenue sources, the extent to which federal revenue would change depends on various assumptions. For example, for the two largest revenue sources that would be affected substantially by statehood—individual and corporate income taxes—GAO used various assumptions to estimate a range of federal revenue. The estimate ranges, as described below, are based on Puerto Rico being treated the same as the states in either 2009 or 2010, based on the year for which GAO had the most recent data.

Individual income tax: In 2010, Puerto Rico taxpayers reported paying $20 million to the United States, its possessions, or foreign countries. According to officials from Puerto Rico's Department of Internal Revenue, most of these payments would have been to the United States. If Puerto Rico had been a state in 2010, estimated individual income tax revenue from Puerto Rico taxpayers would have ranged from $2.2 billion to $2.3 billion (after accounting for estimated payments in excess of tax liability from refundable tax credits, such as the earned income tax credit).

Corporate income tax: In 2009, U.S. corporations paid about an estimated $4.3 billion in tax on income from their affiliates in Puerto Rico. Most of this amount was from an unusually large amount of dividends repatriated from Puerto Rico (compared to amounts repatriated in earlier years or in 2010). Absent that spike in dividends, the federal taxes these corporations would have paid for 2009 would have been about $1.4 billion. If Puerto Rico had been a state in 2009, estimated corporate income tax revenue from businesses that filed a Puerto Rico tax return for that year (or their parent corporations in the United States) would have ranged from $5.0 to $9.3 billion. The low end of this range assumes that U.S. corporations would have used prior-year losses of affiliated Puerto Rico corporations to offset their federal taxable income to the maximum extent (leaving only smaller or newly generated losses available to offset income in subsequent years), among other assumptions. However, this range does not take into account any behavioral changes of businesses with activities in Puerto Rico. For example, according to tax policy experts at the Department of the Treasury and the Joint Committee on Taxation, changes in federal income tax requirements under statehood would likely motivate some corporations with substantial amounts of income derived from intangible (and therefore mobile) assets to relocate from Puerto Rico to lower tax foreign locations. The extent to which such corporations might relocate from Puerto Rico is unknown. Consequently, GAO produced an alternative set of revenue estimates to account for some businesses with activities in Puerto Rico potentially relocating under statehood: this range was -$0.1 billion to $3.4 billion. The low end of this range is negative because U.S. corporations would have used their Puerto Rico affiliates' prior-year losses to reduce their taxes to such an extent that they would have more than offset the positive tax amounts that other corporations continuing to operate in Puerto Rico under statehood would have paid.

Puerto Rico faces various economic and fiscal challenges that could potentially impact changes in federal spending and revenue under statehood. For example, its economy largely has been in recession since 2006, and its levels of employment and labor force participation are relatively low, compared to those of the states. Persistent deficits have resulted in an increase in Puerto Rico's public debt, which represents a much larger share of personal income than in any state (and in February 2014, Puerto Rico's general obligation bonds were downgraded to speculative—noninvestment—grade by three ratings agencies). Puerto Rico has taken recent steps to improve its fiscal position, such as reducing its government workforce and reforming its largest public employee retirement system. Changes in federal program spending and to federal tax law under statehood could lead to economic and fiscal changes of their own in Puerto Rico. That may have a cascading effect on federal spending and revenue levels. However, the precise nature of such changes is uncertain. Because statehood would cause numerous adjustments important to Puerto Rico's future, it would require careful consideration by Congress and the residents of Puerto Rico. Consequently, statehood's aggregate fiscal impact would be influenced greatly by the terms of admission, strategies to promote economic development, and decisions regarding Puerto Rico's government revenue structure.

Puerto Rico has access to many federal programs, and is subject to certain federal tax laws; however, for some programs and for some aspects of tax law, Puerto Rico is treated differently than the states. Options for Puerto Rico's political status include statehood.

GAO was asked to review potential fiscal implications for federal programs if Puerto Rico were to become a state. This report examines potential changes to selected federal programs and related spending changes, and changes to selected federal revenue sources that would be expected should Puerto Rico become a state. This report also discusses economic and fiscal factors under statehood that could influence changes in spending and revenues.

To view the Spanish translation of this highlights page, please see GAO-14-301.