Generally, federal agencies are only allowed to spend the money that Congress has given them. During a government shutdown, agencies may not have funds—raising questions about whether work may continue. How do agencies plan for this?

None had computer network controls to prevent logging on

Our recommendations are to help improve these agencies’ shutdown plans and operations.

The Office of Management and Budget (OMB) issues shutdown guidance for agencies in Circular A-11. Of four selected agency components, three—U.S. Customs and Border Protection (CBP), the Internal Revenue Service (IRS), and the International Trade Administration (ITA)—operated in fiscal year (FY) 2019 under contingency plans that included most of the key information elements specified in Circular A-11 . The plan that the fourth one—Office of the U.S. Trade Representative (USTR)—operated under, authored by the Executive Office of the President, did not include a majority of the key information elements.

OMB guidance instructs agencies to have plans in place for both short and prolonged—longer than 5 days—shutdowns. None of the four selected agencies' FY 2019 contingency plans fully addressed anticipated changes in the event of a prolonged shutdown. GAO found that IRS, ITA, and USTR internally discussed and planned for anticipated operational changes in the event of a prolonged FY 2019 shutdown. CBP officials said they only focused on short-term operational needs. Having a comprehensive plan for a potential prolonged shutdown would help provide clearer workforce expectations during any future shutdowns.

Having sufficient internal controls, such as documented policies and procedures, in place prior to a shutdown can help agencies implement changes in day-to-day operations during a shutdown. Selected agency components all incorporated some internal controls in their shutdown-related activities, as shown in the table below. However, none of the agency components had controls for limiting both physical and virtual workspace access for employees during a shutdown, each citing the difficulty of implementing such controls. Having these controls in place would help components ensure that they operate consistently with their contingency plans and avoid misuse of government resources.

Selected Agency Components Varied in the Sufficiency of Their Internal Controls 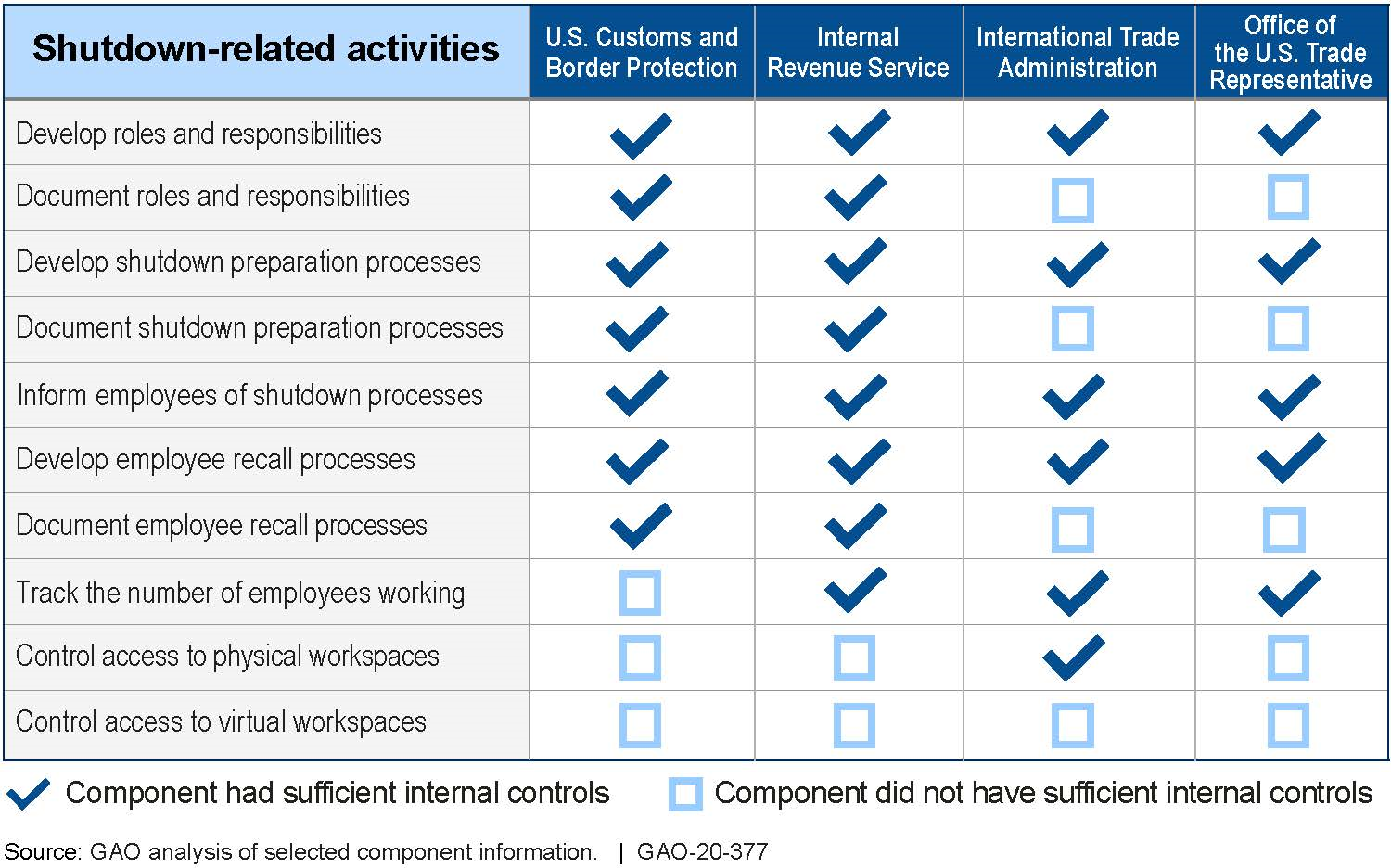 A lapse in appropriations resulted in the federal government partially shutting down from December 22, 2018, to January 25, 2019.

GAO was asked to evaluate agency contingency plans and operations during the FY 2019 shutdown. This report assesses the extent to which selected agencies and selected components (1) had contingency plans that were consistent with applicable OMB guidance, (2) planned for a potential prolonged shutdown and changed operations during the shutdown, and (3) had shutdown policies and procedures consistent with relevant internal control principles.

GAO selected CBP, IRS, ITA, and USTR as agency components for review because they are under the jurisdiction of the Senate Committee on Finance and were affected by the FY 2019 shutdown. GAO reviewed OMB's guidance, agencies' contingency plans, and other documentation. GAO interviewed agency and component officials.