experienced many years of schedule delays,

delivered ships with less capability and lower quality than expected.

These poor outcomes persist because policy and processes enable the Navy to deviate from shipbuilding best practices.

The Navy is planning its biggest fleet size increase in over 30 years. This creates an opportunity for the Navy to improve how it buys ships, adopt a more disciplined approach, and avoid past difficulties.

This report summarizes GAO's body of work on Navy shipbuilding.

Navy ships have routinely cost more and taken longer to build than expected. For example, on its lead ships, the Navy has experienced a total of $8 billion in cost growth and years of schedule delays from classes built during the past 10 years, and many of these ships were provided to the fleet with less capability and poorer quality than expected. These poor outcomes have reduced the Navy's buying power, which contributed to significant shortfalls in achieving the long-range shipbuilding plan it established in 2007 (see figure below). 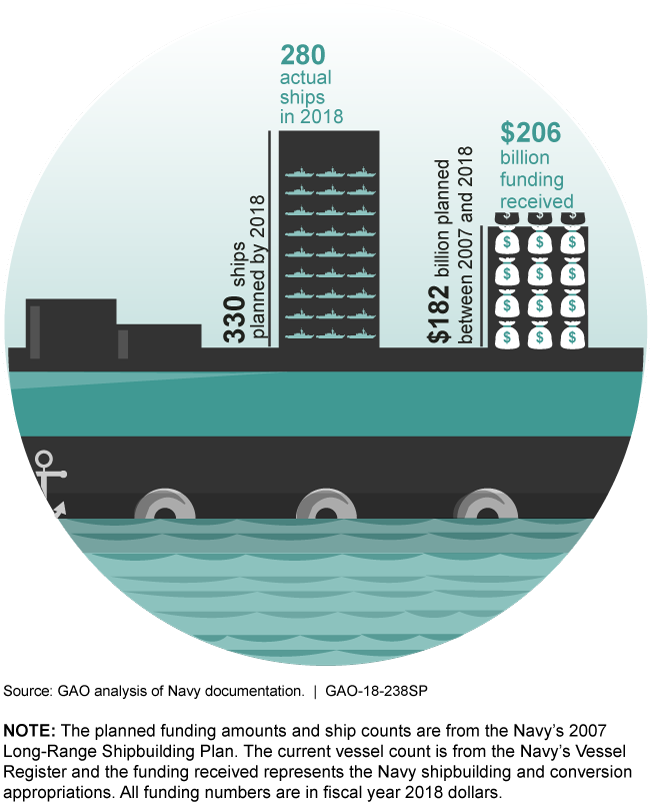 GAO has repeatedly found that the Navy does not consistently follow shipbuilding best practices, which emphasize the attainment of sufficient levels of knowledge at key milestones and could improve acquisition outcomes (see figure below). For example, to reduce risk, programs should have a full understanding of the resources required to build a ship before signing a contract. 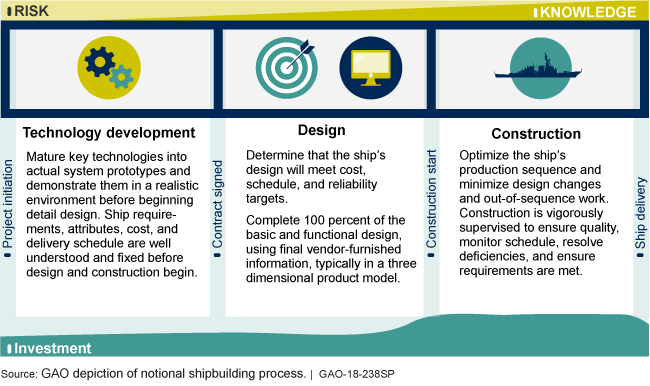 Poor outcomes persist despite reform efforts because shortcomings in the implementation of policies and procedures enable the Navy to buy, build, and deliver ships without key knowledge about the resources required for the effort.

The Navy aims to invest hundreds of billions in its shipbuilding programs over the next decade in support of its plans for a fleet of 355 ships--the largest increase in Navy fleet size in over 30 years. As it embarks upon this ambitious plan, the Navy has an opportunity to improve its shipbuilding approach to avoid past difficulties.

Over the last 10 years, GAO has issued 26 reports, testified before Congress on several occasions, and made 67 recommendations to help improve the Navy's shipbuilding outcomes. This product summarizes GAO's body of work on Navy shipbuilding.

To identify common issues across the Navy's shipbuilding portfolio and challenges within specific programs, GAO examined its past findings and recommendations on Navy shipbuilding and acquisition best practices, and updated analyses from prior work.