This Saturday is Elder Abuse Awareness Day. It’s estimated that as many as 1 in 10 adults age 60 and older are abused each year in the United States.

In today’s WatchBlog, we discuss the Department of Justice’s role in combatting a prevalent form of elder abuse—financial exploitation—from our recent report.

How older people are targeted

Elder abuse can include physical, sexual, and emotional abuse; neglect; and financial scams. Such abuse can occur at the hands of trusted individuals, like family, guardians, or caregivers. But it can also be carried out by strangers or international criminal enterprises.

Older adults are particularly attractive targets for financial scams—they tend to have more wealth than younger people, and the incidence of Alzheimer’s and other dementias that impede judgment gets higher with age.

There are many types of financial scams, but most of them are generally designed to deceive victims and convince them to send money to strangers and international criminal networks. For example, scammers may convince victims that their grandchild is in trouble and needs money or trick victims into paying money for taxes they don’t actually owe. 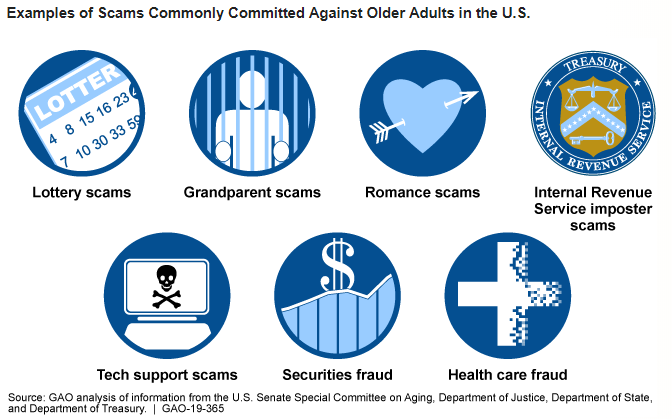 State and local governments are at the forefront of investigating and prosecuting all forms of elder abuse. However, the federal government may need to get involved in cases with complex financial crimes, including financial scams.

DOJ plays a lead role in the federal criminal justice system as well as in federal efforts to address elder justice related to financial crimes such as Medicare fraud and international schemes that affect older victims.

We found that DOJ has established several efforts related to elder justice and has dedicated staff to the issue. For example, DOJ investigates and prosecutes financial  crimes against older adults and provides elder justice training and grants to state and local entities.

However, we also found that DOJ’s planning and assessment of its elder justice efforts could be improved. We recommended that DOJ develop goals and outcome measures to improve how DOJ works on elder abuse issues.

Want to know more? Check out our key issues page on elder abuse.