Planning that big summer trip to Jellystone (or one of the non-fictitious U.S. national parks)? Visiting one of the many concessions services overseen by the National Park Service is one way to avoid Yogi Bear’s creative attempts to swipe your pic-a-nic basket.

Through concessions contracts, companies and individuals (known as “concessioners”) operate businesses such as lodges, restaurants, and recreational services in National Parks. The Park Service has faced challenges managing these contracts in the past, so today’s WatchBlog takes a look at how it’s doing now.

The first director of the Park Service, Stephen Mather, highlighted the importance of concessions operations when he said, “Scenery is a hollow enjoyment to the tourist who sets out in the morning after an indigestible breakfast and a fitful night’s sleep on an impossible bed.”

To get concessioners to make the parks more accommodating, the Park Service follows this 3-step process:  (1) developing a prospectus, which provides information on the concessions operation and the business opportunity it presents to potential bidders; (2) evaluating proposals and selecting the winning bid; and (3) managing the awarded contract. 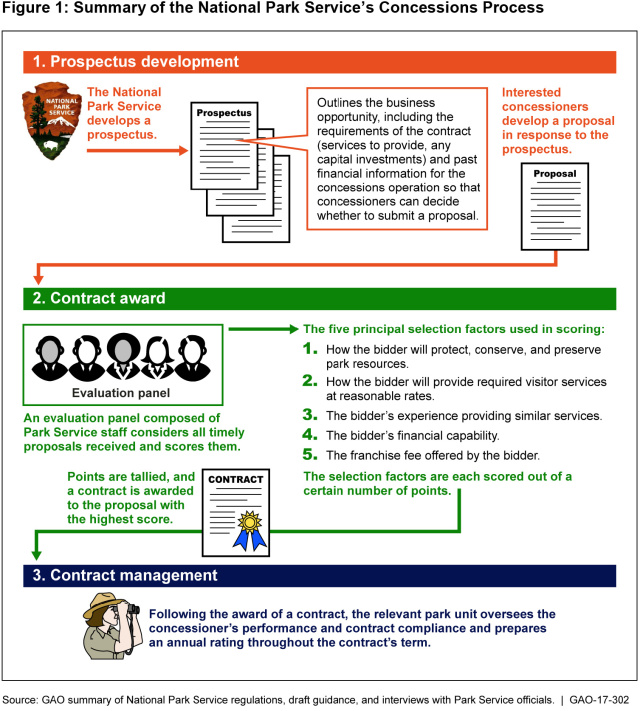 As of April 2016, the National Park Service had 488 concessions contracts in more than 100 parks. In 2015, these operations collectively generated about $1.4 billion in gross revenues and paid about $104 million in franchise fees to the Park Service.  And Yogi can be distracted by so much more than food.  Services most commonly offered under these contracts include

Some challenges are not unbearable

In 2000, we identified three management challenges for the concessions program:

Since then, we’ve found the Park Service has made some improvements, such as hiring people with relevant skills or educational backgrounds, developing several training classes to help improve their skills, and reducing the percentage of extended contracts, from about 45 percent in 2000 to 28 percent in 2016.

Yet concessioners and park officials say the agency still doesn’t always have enough staff to adequately manage concessions contracts and has difficulty generating competition for contracts. In addition, some concessioners said it was challenging to determine how to account for maintenance or capital improvements on buildings or land they have been assigned, such as hotels or restaurants.  For example, one concessioner said it was confusing to determine which category of funds to use for improvements made as part of one project. As a result, the concessioner was still trying to determine how to account for different parts of a project that was completed years ago. As you can see, a single project to update a lodge room could involve four different categories of funding.

While the Park Service’s strategic plan recognizes many of the challenges we’ve identified, it has not established targets or timeframes to address them.

We recommended ways to improve the Park Service's concessions program, including better defining the agency’s performance goals so that it can measure progress toward achieving them.