Have you ever purchased a postcard or eaten a meal at a national park? Chances are you bought it from a concessioner. The National Park Service managed nearly 500 concessions contracts in 2016 that provided visitor services like lodging, food, and retail sales.

The Park Service has taken steps to address issues we've previously identified in its concessions program, including a lack of qualified staff and inadequate oversight, but ongoing challenges remain.

We recommended ways to improve the Park Service's concessions program, including better defining their performance goals so that they can measure progress towards achieving them. 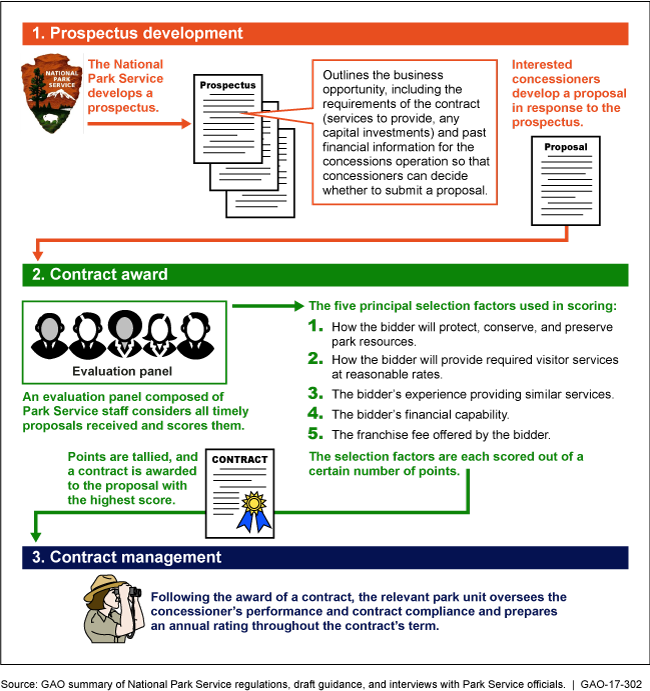 Infographic that shows the stages of an NPS concessions contract.

The Department of the Interior's National Park Service (Park Service) has made several changes to its concessions program since GAO issued a report on the program in 2000. In that report, GAO highlighted three management challenges: (1) inadequate qualifications and training of concessions staff; (2) backlog of expired contracts that were extended; and (3) lack of accountability in the concessions program. In this review, GAO found that the Park Service has taken steps to address these challenges:

Contracts under extension: Park Service has reduced the percentage of extended contracts, from about 45 percent in 2000 to 28 percent in 2016.

Accountability: Park Service headquarters has increased its involvement in the concessions program and has centralized more information on the program. However, in some instances, GAO found that some financial reports that were to be submitted by concessioners to the Park Service were not submitted in a timely manner or data in the submitted reports were inaccurate. Park Service staff did not identify these discrepancies when reviewing the reports. Without timely and accurate financial data from concessioners, the agency could be limited in its ability to oversee certain aspects of the program such as determining whether concessioners paid required fees.

GAO identified some ongoing challenges in each of the three steps of the concessions process. First, developing a prospectus, which provides information on a concessions operation to potential bidders, can be a lengthy and expensive process, and it can be hard to generate competition. Second, the agency's evaluation panels can sometimes have difficulty assessing some proposals, and the award process can be lengthy. Third, contract management can be affected by limited staffing and confusion among concessioners about how to fund maintenance and capital improvements on buildings or land assigned to them by the Park Service. This situation is, in part, because the Park Service has not yet finalized related guidance and made it publicly available to concessioners. The Park Service's commercial services strategic plan recognizes many of the challenges GAO identified and lists goals to potentially address them. For example, the plan has a goal to improve the prospectus and contract award processes by reducing costs and improving efficiency to the government and bidders. In addition, the plan aims to attract more bids for concessions contracts, increase the accuracy of financial reporting, and increase the percentage of concessions staff that receive training. However, these goals do not have targets or timeframes for their completion. Leading practices indicate it is critical for an agency to set meaningful performance goals and to measure progress towards these goals. Without clearly defined performance goals that contain targets or timeframes, it will be difficult for the Park Service to track its progress in these areas and determine where additional effort may be needed to address identified challenges in the concessions program.

The 1998 Concessions Management Improvement Act governs concessions services at national parks. In 2016, the Park Service managed 488 concessions contracts, and such contracts generated about $1.4 billion in gross revenues in the prior year. Under these contracts, companies and individuals operate businesses in parks, including lodges, restaurants, and recreational services. GAO was asked to review the concessions program.

GAO recommends that the Park Service review and adjust its process to help ensure timely and accurate reporting of financial data from concessioners, finalize its guidance and make it public, and develop performance goals with targets and timeframes in its commercial services strategic plan. The Department of the Interior agreed with GAO's recommendations.

Creature Comforts in the Great Outdoors