On June 1, 1967, the Beatles released their album, Sgt. Pepper’s Lonely Hearts Club Band in the United States. It revolutionized modern music and helped usher in the Summer of Love. In honor of this musical and cultural milestone, the WatchBlog shares some GAO reports you may recognize in the classic lyrics.

In 1967, the Daily Mail newspaper reported 4000 potholes in the streets of Blackburn, Lancashire, spurring John Lennon to write these lyrics for Rolling Stone’s #1 greatest Beatles song of all time: A Day in the Life.

“I read the news today oh boy
Four thousand holes in Blackburn, Lancashire
And though the holes were rather small
They had to count them all”

Only the Fab Four could make a hit singing about potholes—but they may be the last ones. Going forward vehicle-to-infrastructure technologies could make monitoring pavement conditions easier and more cost-effective. One state agency we interviewed specifically noted identifying potholes as a potential benefit from this technology. Future songwriters, take note!

“Fixing a hole where the rain gets in…” 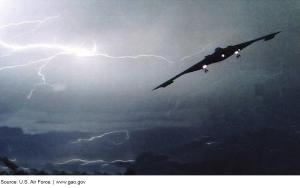 The Department of Defense’s weather satellites provide key data to DOD for military operations and civilian services, such as weather forecasting and climate research.

If the satellites have “capability gaps,” they aren’t providing the necessary data to, for example, measure tropical cyclone intensity or sufficiently characterize the cloud patterns for weather forecasting. DOD reviews its satellites to identify gaps. We examined one of DOD’s reviews and found that they were generally thorough. However, effective coordination with the National Oceanic and Atmospheric Administration—which works with international partners on satellite coverage—could help ensure that everyone is working with the same assumptions about weather data availability.

But if the forecast is solid and there’s nothing else you can do to keep the rain from getting in, at least there’s flood insurance to help with the cost of repairing your home. The National Flood Insurance Program is a key component of the federal government’s efforts to limit the damage and financial impact of floods.

However, the Federal Emergency Management Agency, which administers the program, is in a financial hole of its own, owing $24.6 billion to Treasury as of March 2017 for money borrowed to pay claims and other expenses. We’ve placed NFIP on our High Risk list  because of concerns about its long-term financial solvency, related operational issues, and need for comprehensive reform.

“Give me your answer, fill in a form
Mine for evermore
Will you still need me, will you still feed me
When I'm sixty-four”

In When I’m Sixty-Four, the Beatles imagine how life might be for a couple growing old together. The lyrics highlight some of the issues around growing old: Where will you live? Who will care for you? And what will the rest of us do when you retire from the workforce?

The oldest Baby Boomers are now retiring by the thousands each day—and living longer than previous generations. Our testimony last month on the nation’s fiscal health identified short- and long-term budgetary challenges of programs that care for Boomers and others over 64: Social Security (the Old-Age and Survivors Insurance and Disability Insurance programs) and Medicare. While these two programs support millions of older Americans, they need to be on a more sustainable financial footing.

“I could be handy, mending a fuse
When your lights have gone
You can knit a sweater by the fireside
Sunday mornings go for a ride,
Doing the garden, digging the weeds,
Who could ask for more?”

People in the 64-year-old age bracket tend to retire from the workforce, with eligibility for Social Security starting at age 62. Looking at trends in the federal workforce, we saw that the loss of these experienced federal employees threatens to aggravate the growing problem of skills gaps for many agencies.

These workers don’t necessarily mend fuses and dig weeds; rather, they work at the expert level in cybersecurity, human resources, economics, science, technology, engineering, and mathematics. While a certain amount of retirements can benefit agencies by opening opportunities to bring in fresh skills and new program goals, the turnover in these areas needs to be strategically managed and monitored in order to minimize the loss of agencies’ institutional knowledge and leadership. 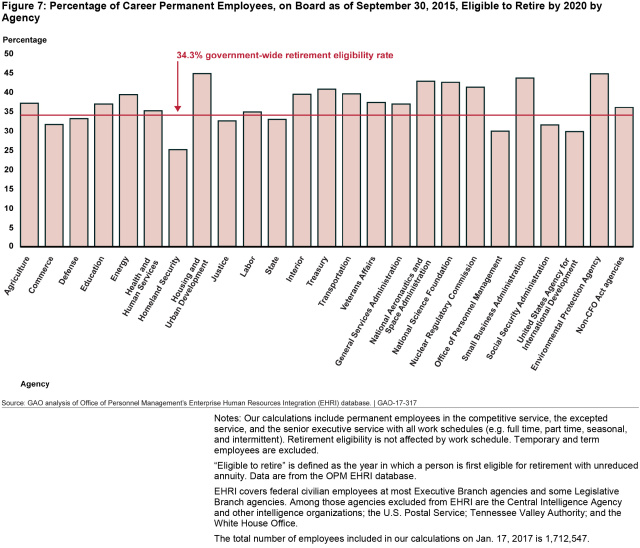 But what about that question of who will care for you when you’re long past 64, if you can’t do it yourself? You can research nursing homes using a Five-Star Quality Rating System on the Nursing Home Compare website. We recommended that the Centers for Medicare & Medicaid Services—the agency that runs the site—evaluate the feasibility of adding consumer satisfaction information to the website’s nursing home rating system. As shown below, this information could enhance the rating system and help people choose the right home. To learn more, listen to our podcast. 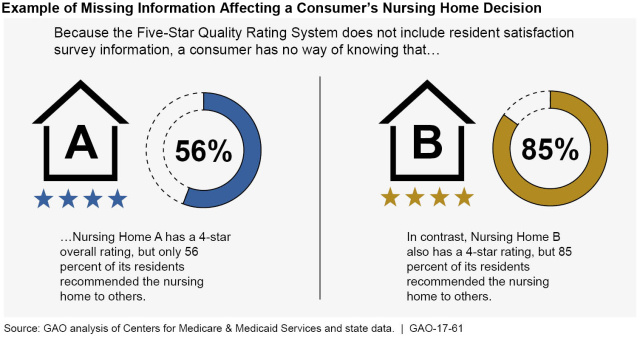