While the U.S. aviation system is one of the safest in the world and major aircraft crashes have become less common, close calls in the air and on the ground still frequently occur. For National Safety Month, the WatchBlog gathered some of our work on aviation safety, in the areas of general aviation and safety around airport terminals, as well as Safety Management Systems, a new approach for making our skies safer.

Safety in the Air and on the Ground

Look up and you’ll see that not all planes are large commercial airplanes or military aircraft. The general aviation industry includes over 220,000 non-commercial, non-military aircraft—everything from balloons to helicopters, as shown below.
Annually, there are hundreds of fatalities related to these aircraft, most attributed to pilot error and involving a loss of aircraft control. 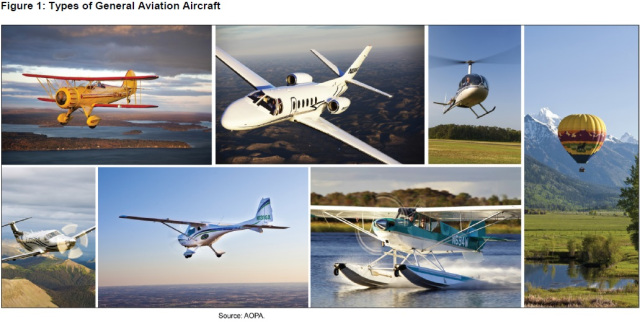 But aviation safety isn’t just about what happens mid-flight. Takeoffs, landings, and movement around the surface area of the airport—what’s known as the terminal area—have safety risks, too. Incidents in the terminal area include near misses in the air, as well as runway excursions and incursions, as illustrated below.

FAA has taken steps to improve safety at and around airports, but rates of reported safety incidents in the terminal area continue to rise. It’s unclear if the increase is due to improved reporting or an actual increase in incidents.

For decades, the aviation industry and federal regulators, including FAA, have used data reactively to identify the causes of aviation accidents and incidents and enable actions to prevent recurrence. With the decline in major accidents resulting in less data available for reactive analysis, FAA is now also working to use data proactively, via a safety management system (SMS) approach, to search for and address risks to prevent incidents or accidents.

SMS is a process that incorporates systematic procedures, practices, and policies, as shown below. Through SMS, FAA will attempt to use existing information to help identify trends, warnings, and red flags before an incident or accident occurs.

The SMS approach relies on data to help with risk-based decision making. While FAA has good information about certain types of incidents, the agency has less for others. For example, FAA has limited data on

Without enough of the right data, the effectiveness of SMS may be limited.

To maximize the potential benefits of SMS, as well as help improve aviation safety overall, we have made a variety of recommendations to FAA. These include:

We will continue to monitor FAA’s actions related to our recommendations.