Climate change has led to record low levels of ice in the U.S. Arctic region—prolonging the maritime shipping season and opening up shipping routes. But Arctic conditions are harsh and volatile, and a lack of maritime infrastructure poses safety risks.

We testified that the White House and Coast Guard have strategies to address the infrastructure gaps but the strategies don't include ways to measure the progress being made. Such measures are necessary for demonstrating progress in addressing the gaps and for planning federal actions in the U.S. Arctic.

We made recommendations to address this in prior reports. 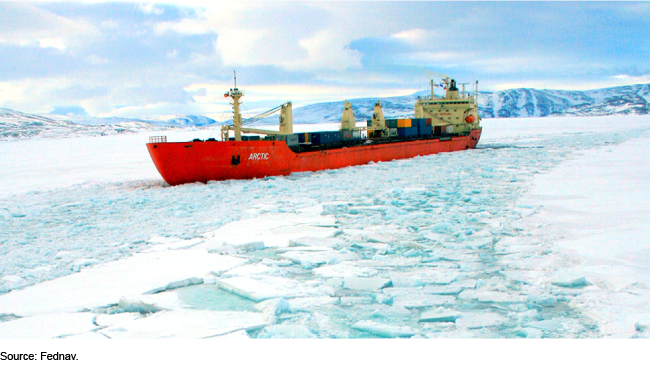 Maritime shipping activity, as indicated by the number of vessels in the U.S. Arctic, has increased from 2009 through 2021 (see figure). Although diminished sea ice has prolonged the shipping season, environmental changes also resulted in less predictable conditions and more volatile weather and sea ice. Such factors create safety risks, particularly when combined with the lack of maritime infrastructure such as a deep draft port and comprehensive nautical charting.

Number of Vessels in the Coast Guard Arctic Area of Interest, 2009-2021

Note: The Coast Guard District 17 area of interest extends north of the Bering Strait to the North Pole, east to Banks Island in the Canadian Arctic, and west to the New Siberian Islands in Russia.

Federal agencies' actions to address Arctic infrastructure gaps have not been informed by a government-wide assessment of risks. Federal efforts include the Coast Guard's Arctic seasonal forward operating bases and the National Oceanic and Atmospheric Administration's continued charting of Arctic waters. However, GAO found in April 2020 that such actions were not based on a government-wide assessment of the economic, environmental, and safety risks posed by infrastructure gaps. As a result, GAO recommended that the interagency U.S. Committee on the Marine Transportation System conduct such a risk assessment. The Committee has recently implemented this recommendation and provided information that could inform federal agency investment decisions.

Although the White House and Coast Guard have issued Arctic strategies, neither has included a means to measure progress in addressing Arctic maritime gaps as GAO recommended. In April 2020, GAO found that government-wide efforts to address U.S. Arctic maritime infrastructure lacked a current strategy and consistent interagency leadership. Since then, the White House designated the Arctic Executive Steering Committee as the interagency group responsible for federal Arctic coordination and published a national strategy. However, the strategy does not establish goals and measures as GAO recommended in April 2020. Similarly, although the Coast Guard published its own Arctic strategy, it has not yet implemented GAO's recommendations from June 2016 to develop a means to measure progress in addressing capability gaps. Without implementing GAO's recommendations, the results of government-wide and Coast Guard efforts cannot be demonstrated, and decision makers cannot gauge the extent of federal progress in addressing maritime infrastructure and capability gaps.

Arctic sea ice has diminished, lengthening the navigation season and increasing opportunities for maritime shipping. However, the lack of maritime infrastructure exacerbates risks inherent to the Arctic such as vast distances and dangerous weather.

This statement discusses: (1) U.S. Arctic maritime shipping trends since 2009, (2) the extent to which federal actions have been informed by risk, and (3) government-wide and Coast Guard strategies to address maritime infrastructure and assess outcomes.

This statement is based primarily on GAO's April 2020 report on Arctic maritime infrastructure and its June 2016 report on Coast Guard Arctic capabilities. Since these reports, GAO reviewed White House and Coast Guard actions in response to GAO's recommendations. For this statement, GAO also interviewed the Arctic Executive Steering Committee and collected Coast Guard shipping data.