DOD and the State Department provide equipment—such as vehicles and night-vision goggles—to El Salvador, Guatemala, and Honduras. This assistance is intended to help address widespread security challenges and totaled over $66 million from FYs 2017-2021.

Some equipment has allegedly been misused. For example, government officials in Guatemala allegedly used Jeeps from DOD to intimidate diplomats.

Neither DOD nor State have policies to record misuse allegations and therefore can't identify potential trends. Also, DOD doesn’t have policies for investigating misuse of certain types of equipment.

El Salvador, Guatemala, and Honduras make up the Northern Triangle of Central America 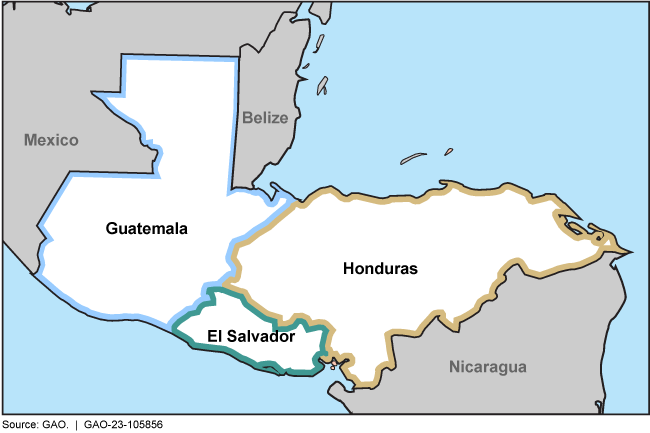 Within the Northern Triangle countries of El Salvador, Guatemala and Honduras, the Departments of Defense (DOD) and State reviewed multiple allegations of misuse of DOD-provided equipment in Guatemala. From August 2018 to October 2021, according to agency officials, DOD-provided Jeeps (shown below) were allegedly misused on multiple occasions for purposes outside their intended operations. In one case, DOD determined they were deployed to intimidate U.S. embassy officials. However, neither DOD nor State recorded most of these allegations because they do not have policies outlining how to record them. As a result, the agencies could not identify potential trends in alleged misuse. Further, DOD does not have policies to investigate alleged misuse for equipment provided under certain authorities, and may not be addressing allegations of misuse effectively.

Jeeps Provided by DOD to the Government of Guatemala

Federal law requires for certain defense articles and defense services, to the extent practicable, an end-use monitoring program to provide reasonable assurance that recipients use these defense articles and defense services for the purposes for which they are provided. However, DOD officials told GAO that the Golden Sentry program is not designed to verify how recipients use equipment. Instead, according to DOD officials, the program is designed to verify whether the recipient has maintained custody of the equipment and implemented any required physical security protections. DOD officials said they primarily rely on third-party reports to identify misuse but officials had not considered looking into allegations in third-party reports GAO identified. Because it has not designed its program to identify potential misuse, DOD may lack reasonable assurance that recipients are using equipment for authorized purposes only.

GAO analyzed DOD and State documentation about their response to alleged incidents of misuse and data about DOD's monitoring completed in the Northern Triangle. GAO also interviewed agency officials.