About half of the funding for the Trust Fund comes from taxes on motorboat fuel. Import duties and other taxes, such as taxes on sport fishing equipment, also support it. The taxes are imposed on businesses but may be passed onto consumers—via increased costs on these products.

Anyone can buy products like sport fishing equipment, so the extent to which boat users are contributing to the fund is unknown. 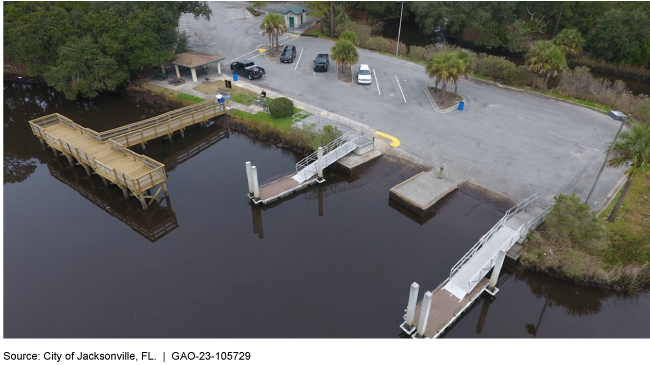 Over a quarter of the U.S. population engaged in recreational boating in 2018, according to a survey commissioned by the U.S. Coast Guard. The survey also estimated that more motorized vessels were used (5.0 million) at least once in 2018, compared with nonmotorized vessels, such as kayaks (3.9 million).

The Sport Fish Restoration and Boating Trust Fund (Trust Fund), managed by the Fish and Wildlife Service (FWS), received tax and import duty revenues averaging about $713 million for fiscal years 2012 through 2021, adjusted for inflation. Motorboat fuel taxes make up about 49 percent of this funding.

Note: Data have been adjusted for inflation and are presented in fiscal year 2021 dollars. See figure 3 in this report for more information on these revenue sources.

Because of the indirect way that the Trust Fund is supported—through taxes and import duties—GAO was not able to determine the full extent that users of nonmotorized and motorized vessels contribute to the Trust Fund. These taxes are imposed on refiners of gasoline along with manufacturers or importers of certain products, and they may be passed on to consumers as an increased cost when they purchase products, such as tackle boxes, and fishing rods. All vessel users—as well as individuals who do not own a vessel—can purchase these products. An exception is the motorboat fuel tax, where a formula is used to estimate the portion of fuel taxes attributable to motorboats based on the number of registered motorized vessels.

The Trust Fund supports several programs, including the Boating Access program managed by FWS, and the Recreational Boating Safety program managed by the Coast Guard. Grants awarded under these programs fund activities, such as building boat ramps or educating boaters on safety issues, that can benefit both types of vessel users. As a result, GAO was not able to determine the specific extent that nonmotorized and motorized vessels users benefit from these activities.

Recreational boating is a popular activity in the U.S. It includes the use of both nonmotorized and motorized vessels. The Trust Fund provides federal funding for boating recreation activities, including improving boating access and promoting boating safety. There have been discussions on the equitability of contributions to the Trust Fund, including which vessel users pay the taxes that fund the Trust Fund, according to stakeholders.