The Department of Defense is working to digitally connect its space, air, land, sea, and cyber assets to help military commanders better communicate and share information in real time. This effort will depend on contributions by all of the military services.

The Advanced Battle Management System is the Air Force's contribution to this effort. It is a secure communications network that allows commanders and warfighters to share meaningful data from the field faster. This year we found that the Air Force made some progress with documenting its planning efforts as we recommended in April 2020. However, more still needs to be done. 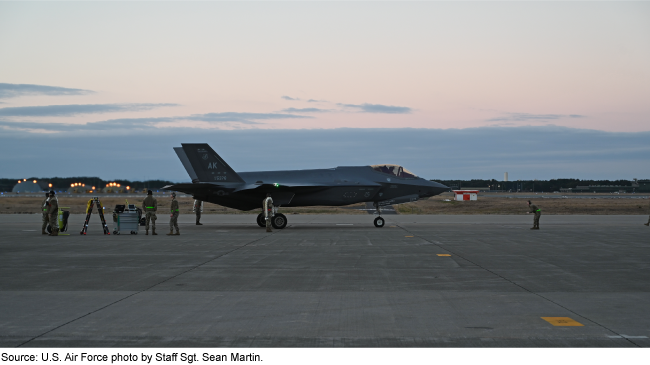 Joint All-Domain Command and Control (JADC2) is a long-term effort to connect military assets across space, air, land, sea, and cyber domains. The Department of Defense (DOD) intends for JADC2 to analyze warfighting data across all of those domains to allow decision makers to identify, execute, and monitor operations more effectively.

DOD is in the early stages of developing JADC2 and released initial guidance, including a strategy that outlines broad goals. However, DOD has not yet defined the details, such as which existing systems will contribute to JADC2 and what future capabilities need to be developed. A House report directed DOD to report on the scope, cost, and schedule of the overall JADC2 effort. Currently, DOD is in the early stages of determining those elements.

In April 2020, GAO reported on the Air Force's contribution to JADC2—the Advanced Battle Management System (ABMS)—and recommended that the Air Force develop acquisition and planning documents. Since then, the Air Force has taken steps to do so and has defined two ABMS efforts:

In June 2022, the Air Force established a consortium of companies to assist in developing requirements for a network, called the ABMS Digital Infrastructure, to enable ABMS efforts. Additionally, in September 2022, the Air Force established a new leadership structure for ABMS. While these are positive steps toward developing ABMS, the Air Force has not delivered any capabilities to date and is in the process of identifying future capabilities and when they will be delivered.

DOD military commanders require a real-time, complete picture of the battlespace to quickly make informed decisions. Historically, DOD has prioritized individual systems over joint capabilities and interoperability. DOD intends for JADC2 to address this issue by connecting warfighting capabilities through digital networks to enable commanders to effectively communicate and share information. Each military department is contributing to JADC2; the Air Force's part is called ABMS.

Members of Congress included a provision for GAO to conduct a review of ABMS. In addition, GAO was asked to evaluate how ABMS will contribute to DOD's broader goals for JADC2. This report addresses the extent to which (1) DOD has defined JADC2, and (2) the Air Force has developed plans for ABMS.

In April 2020, GAO recommended the Air Force develop a plan to mature technologies, develop a cost estimate, and conduct an affordability analysis for ABMS. DOD concurred. The Air Force is taking steps to address the recommendations—through acquisition and planning documents—but needs to do more to fully address them.