Until recently, states could not require e-commerce businesses operating out of state to collect taxes on sales to residents of their state unless the business had a physical presence in that state. This changed in 2018, and states quickly enacted remote sales tax requirements.

However, this resulted in a complex patchwork of requirements—such as different exemptions for some small businesses in different states. Consequently, businesses face substantial compliance costs and uncertainty navigating these requirements.

We recommended that Congress consider establishing guidelines to guide state taxation of remote sales to resolve these issues. 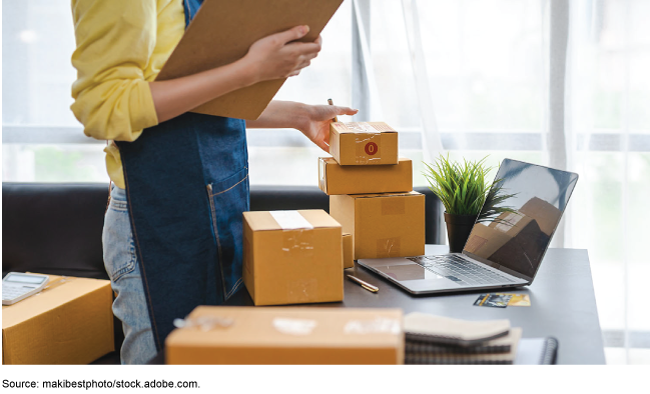 The 2018 U.S. Supreme Court decision, South Dakota v. Wayfair, held that states could require out-of-state (or remote) businesses to collect sales taxes even without a physical presence, such as a store or warehouse in the state. States responded quickly with new remote sales tax requirements, resulting in a complex patchwork of requirements with wide variation. For example, states established different monetary and transactional (or economic nexus) thresholds exempting some small businesses from remote sales tax requirements and different rules for calculating those thresholds. 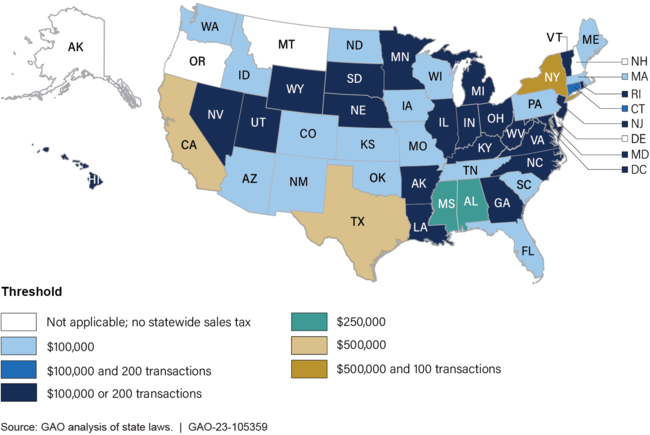 Based on state-reported data, GAO estimates 2021 nationwide remote sales tax collections to be about $30 billion. Businesses reported that they incurred software costs to expand their multistate tax collection capabilities, audit and assessment costs associated with increased tax jurisdiction exposure, and costs to stay current with legal requirements in multiple jurisdictions.

GAO found that the overall remote sales tax system raises concerns regarding all three criteria for a good tax system. For example:

For example, one proposal for incremental reform is that a state adopt a single statewide point of registration, filing, administration, and audit. One proposal for comprehensive reform is that states be required, as a condition of taxing remote sales, to participate in an interstate collaborative mechanism through which states agree on uniform standards and centralized processes.

Some states and multistate organizations have taken some steps toward implementing some of the proposed incremental reforms, but a comprehensive approach has yet to be adopted. While individual state actions may assist certain businesses in complying with a particular state's remote sales tax requirements, they do not alleviate the multistate complexities that exist. To date, there is no comprehensive approach in place that addresses multistate complexities and includes all states seeking to tax remote sales.

In addition, substantial uncertainty currently exists regarding to what extent remote sales taxation is legally permissible for states and localities. For example, uncertainty exists regarding what connection (or nexus) a business must have with a state before the state may require the business to collect sales taxes on its behalf; when remote sales tax requirements violate the Constitution's prohibition on state laws that discriminate against or impose an undue burden on interstate commerce; and under what circumstances locally-administered remote sales tax requirements are constitutionally permissible.

One effect of this uncertainty is that legal disputes over state and local authority to require sales tax collection have developed. Such disputes can be expensive for parties to litigate and can lead to prolonged and uncertain outcomes for all involved. Without a comprehensive approach in place, courts are left to address these issues on a piecemeal basis.

While the right of states to levy taxes, and to empower their localities to do the same, is a well-founded principle of state sovereignty, under the Constitution's Commerce Clause, Congress has the authority to regulate interstate commerce. The Supreme Court has stated that Congress has the “ultimate power to resolve” issues with taxation of remote sales. Federal legislation which puts nationwide parameters in place for state taxation of remote sales could help address the uncertainties and multistate complexities and improve the overall system.

Electronic commerce (e-commerce) sales have grown rapidly over the past quarter century. However, until recently, states could not require e-commerce and other businesses operating out of state to collect taxes on sales to residents of their states unless the business had a physical presence in the state.

Two fundamental objectives of tax policy are (1) to raise revenue sufficient to fund projected government spending, and (2) to do so in a manner consistent with three long-standing and widely accepted criteria for a good tax system: equity; economic efficiency; and a combination of simplicity, transparency, and administrability. In the more than 4 years since the Wayfair decision, concerns have been raised regarding the extent to which the overall remote sales tax system aligns with these criteria.

To conduct this work, GAO administered a survey to revenue agencies in all 45 states with a statewide sales tax and the District of Columbia. Forty-three states and the District of Columbia responded, for a response rate of more than 95 percent. GAO also interviewed multiple organizations representing states and businesses, as well as businesses engaged in e-commerce and multistate taxation, selected to represent a broad range of perspectives.

GAO is recommending that Congress consider working with states to establish nationwide parameters for state taxation of remote sales. Such parameters should balance state interests with the need to address multistate complexities. The parameters should improve the overall system's alignment with the criteria for a good tax system and help address existing uncertainties regarding what remote sales taxation is legally permissible by states and localities.