The U.S. Postal Service's financial woes have been on our High Risk List since 2009. Since then, USPS has made service changes to cut costs. Some of those changes affected on-time mail delivery, including in rural areas—where there may be few alternatives to USPS for mail and packages.

Despite concerns that changes disproportionately affected rural areas, we found few differences in on-time delivery between rural and urban areas in October 2020-December 2021.

U.S. Postal Service (USPS) Districts with Differences of 5 Percentage Points or More in On-Time Service Performance between Rural and Urban Areas for Periodicals, October 2020 through December 2021 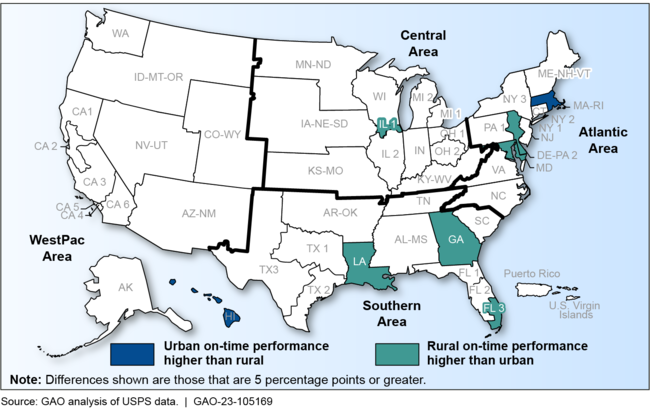 According to USPS documents and officials, USPS assesses the effects of selected changes through analysis, stakeholder input, and monitoring. For the two service standard changes GAO reviewed that were implemented in October 2021 and May 2022, USPS sought and analyzed stakeholder input on potential rural effects beforehand. Since implementation, USPS has not monitored effects on rural areas, although it continues to monitor service performance overall. For the three selected operational procedure changes implemented between August and November 2021, USPS reviewed each through analysis and stakeholder outreach nationwide before implementation started. Since implementation, USPS continued monitoring overall service performance, but did not specifically assess the effects on rural areas. Given that the many concurrent changes USPS is implementing may have evolving effects, the extent to which the changes affect rural areas in the future is unknown and warrants additional review.

USPS provides postal services across the U.S., including in rural areas, as part of its mission to provide universal postal service. USPS has faced financial difficulties in meeting that mission. Accordingly, USPS's financial viability has been on GAO's High Risk List since 2009. USPS has recently made operational changes to try to restore its financial self-sufficiency.

GAO was asked to review on-time service performance and the impact of USPS's operational changes in rural areas. This report describes (1) the extent that USPS's on-time service performance for mail and packages differs between rural and urban areas and (2) how USPS assesses the effect of operational changes on rural areas before and after making such changes.