The FCC and the National Telecommunications and Information Administration (NTIA) regulate use of radio-frequency spectrum in the U.S. to help ensure there's enough for emerging 5G networks, satellites, and everything else. When there could be interference, FCC and NTIA coordinate with other agencies.

We testified about our reviews of the spectrum reallocation process and how agencies collaborate on potential spectrum interference issues. 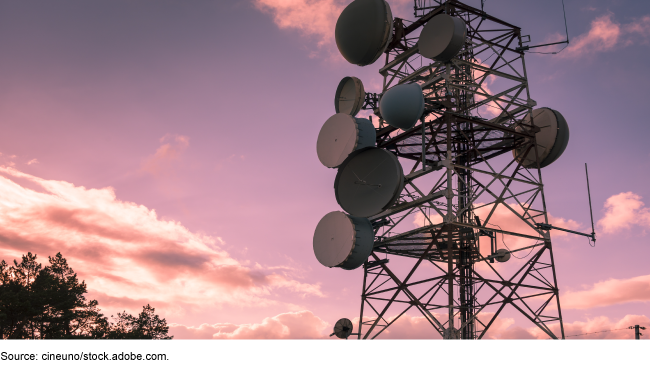 Spectrum is a natural resource that enables wireless communications and critical government operations, such as shown in the figure below. A key spectrum management activity of the National Telecommunications and Information Administration (NTIA) is to work with other agencies, such as the Federal Communications Commission (FCC), to execute spectrum reallocations, so that FCC can auction the spectrum for commercial use. However, GAO found that NTIA lacks a comprehensive planning process for doing so. Reallocating spectrum, which involves transferring spectrum used by the federal government to nonfederal users, is a complex, often lengthy undertaking involving many stakeholders and steps. For reallocations, NTIA typically collects input from those agencies whose use of spectrum would be affected by a proposed reallocation. NTIA may also help agencies evaluate the potential effects that a proposed reallocation could have on the agencies' spectrum-dependent operations. While NTIA follows some usual steps in conducting reallocations, NTIA lacks plans with objectives and targets, integrated master schedules, and risk assessments. By following these leading practices in program management, NTIA may be able to more effectively implement reallocations.

To address potential interference among proposed uses of spectrum, NTIA and FCC employ various coordination mechanisms. For domestic matters, the agencies coordinate through an NTIA-led committee that provides input to FCC's spectrum proceedings. However, GAO found these mechanisms do not fully reflect leading collaboration practices. For example, while the documents that guide coordination between FCC and NTIA emphasize reaching consensus whenever possible, there are no clearly defined and agreed-upon processes for resolving matters when agencies cannot do so. GAO's review found that these issues affected the United States' participation in international conferences regarding the regulation of the global use of spectrum. For example, disputes among the agencies and the inability to reach agreement on U.S. technical contributions challenged the U.S.'s ability to present an agreed-upon basis for decisions or a unified position.

This statement is based on two GAO spectrum management reports issued in June 2021 (GAO-21-474) and January 2022 (GAO-22-104537). Specifically, it discusses the extent to which (1) NTIA has developed a planning process to guide its spectrum reallocation efforts, and (2) cognizant federal agencies follow leading practices in collaborating on potential spectrum interference issues. Among other things, GAO compared the agencies' spectrum reallocation and coordination efforts with applicable leading practices.

In the June 2021 and January 2022 reports, GAO made a total of 14 recommendations. These include that NTIA develop plans for executing spectrum reallocations and that FCC and NTIA update documents and processes related to spectrum-management coordination. The agencies generally agreed to implement the recommendations, but have not yet done so.