This testimony addresses the Department of Homeland Security's work with partners to combat threats from weapons of mass destruction and improve DHS morale.

For example, DHS works with federal, state, and local partners to address threats by acquiring detection technologies, providing training, and more. As we reported in April 2022, state and local partners want more communication with DHS and more regular meetings for partners across all threat areas.

The DHS office in charge of these efforts also faces employee morale challenges and improved slightly but remained at the bottom in a 2020 survey of the best places to work in government.

Portal Monitors to Detect Radiation at a Land Border Crossing 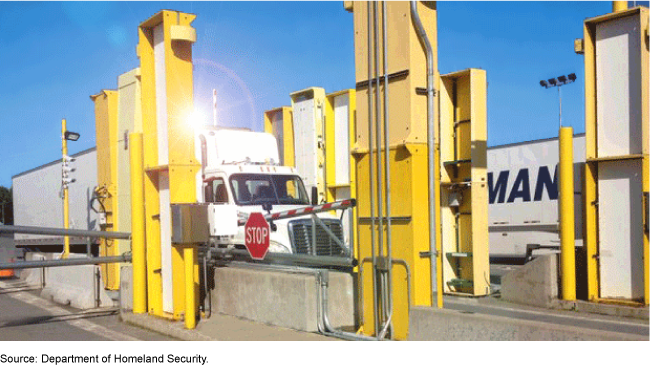 The Department of Homeland Security's (DHS) Countering Weapons of Mass Destruction Office (CWMD) carries out a range of functions to serve its federal, state, and local partners in combating chemical, biological, radiological, and nuclear threats. In April 2022, GAO found that CWMD's partners were satisfied with the services they received in some areas, including technology acquisition and training, but saw room for improvement in others. Areas for improvement included communicating with and convening state and local partners, acquiring a key radiation detection technology, and assessing gaps in radiological and nuclear threat detection capabilities.

Biological threats. CWMD performs a range of information-sharing, training, and support functions related to biological threats. For example, CWMD produces biosurveillance reports that it distributes to federal, state, local, and tribal agencies. State and local officials in the biological threat area generally praised CWMD for its communication about these threats and spoke highly of CWMD's regionally based coordinators. However, some of these officials said that more interaction at the headquarters level would help them better understand the national landscape and DHS's priorities.

Radiological and nuclear threats. CWMD serves federal, state, and local partners in this threat area by acquiring technologies, providing training, and producing threat assessments. State and local officials generally praised the technology assistance and training that CWMD has provided. However, officials from U.S. Customs and Border Protection (CBP) identified problems with CWMD's efforts to replace radiation portal monitors that CBP operates at high-volume ports. In addition, CWMD's threat assessments do not include an analysis of capability gaps—an element of earlier DHS threat assessments that Department of Defense and CBP officials said was vital.

Moreover, officials from across the threat areas said they would appreciate CWMD convening jurisdictions to discuss programs and lessons learned.

CWMD has taken steps to identify causes of morale problems in the office and to enhance employees' shared sense of mission. For example, CWMD has used surveys and listening sessions to gather information on the causes of low morale. To improve employees' understanding of their shared mission, CWMD has instituted town hall meetings in which employees share how they help accomplish the office's mission. Some survey data suggest that such steps may be having a positive effect on morale. However, CWMD's overall ranking in the list of Best Places to Work in the Federal Government® remained low in 2020, at 403 out of 411 agency subcomponents.

This testimony summarizes the information contained in GAO's April 2022 report entitled Countering Weapons of Mass Destruction: DHS Could Improve Its Acquisition of Key Technology and Coordination with Partners (GAO-22-104498). Specifically, the testimony discusses CWMD's efforts and ongoing challenges in two areas: (1) serving its federal, state, and local partners and (2) improving morale within CWMD.

The report on which this testimony is based made four recommendations, including that CWMD coordinate with CBP to reassess the acquisition strategy for replacement radiation portal monitors, specify how often it will convene state and local partners in all threat areas, and specify a plan for reconstituting the capability gap analysis function in the radiological and nuclear threat area. DHS agreed with the recommendations.