The Department of Labor conducted more than 5,000 compliance investigations over 6 years and found violations of the Act leading to over $220 million in back wages for workers. Labor also determined that 60 contractors should be excluded from receiving new federal contracts for 3 years.

We testified that Labor didn't consistently share key information with contracting agencies—increasing the risk that excluded contractors might get contracts.

We recommended ways to address this in a related report. 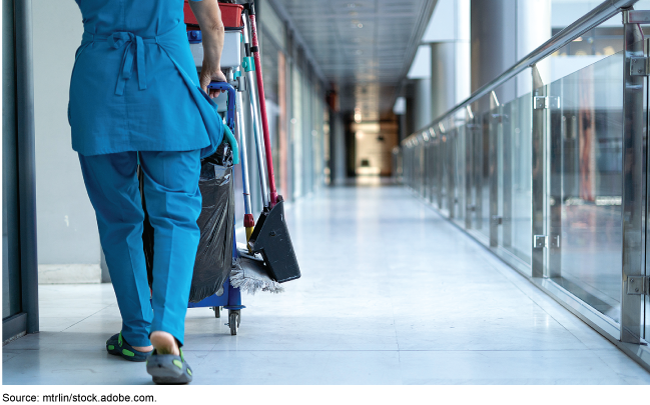 The Department of Labor (DOL) completed over 5,000 Service Contract Act (SCA) cases in fiscal years 2014 through 2019 according to available data. For many, this, which for many resulted resulted in awarding of back wages to federally contracted security guards, janitors, and other service workers, in fiscal years 2014 through 2019, according to available data. DOL enforces the SCA, which was enacted to protect workers on certain types of federal service contracts. DOL found SCA violations—primarily of wage and benefit protections—in 68 percent of cases. Employers across a range of service industries agreed to pay around $224 million in back wages. Sixty cases resulted in debarment—a decision to prevent an employer from being awarded new federal contracts generally for 3 years. DOL's strategic plan emphasizes optimizing resources for resolving cases using all available enforcement tools. However, GAO found that DOL did not analyze its use of enforcement tools, such as debarment or employer compliance agreements. Therefore, DOL may have lacked a complete picture of the effectiveness of these enforcement strategies. GAO recommended that DOL analyze information on its enforcement actions, including SCA debarment processes and outcomes. In April 2022, DOL reported that it had developed a revised internal tracking system to provide a year-end summary of information on agency debarment actions. DOL has taken the first step, but, although DOL would still need to analyze this information.

DOL reported various challenges to enforcing the SCA, including difficulty communicating with contracting agencies. For example, DOL officials told GAO that poor communication with contracting agencies—particularly with the U.S. Postal Service (USPS)—can affect and delay cases, though USPS officials told GAO they were unaware of any communication gaps. Without addressing communication issues between USPS and DOL, USPS's implementation and DOL's enforcement of the SCA may be weakened. In April 2022, the two agencies reported that they had developed a draft Memorandum of Understanding (MOU) that outlines protocols and procedures to increase collaboration and SCA compliance. However, the agencies also noted that they had not been able to finalize the MOU because of communication challenges.

GAO found that contracting agencies may face SCA implementation challenges, including not having key information about SCA debarments and violations from DOL. When recording SCA debarments, DOL did not always include the unique identifier for an employer so that contracting agencies could accurately identify debarred firms. DOL also did not have a process that consistently or reliably informed contracting agencies about SCA violations by employers. Without improved information sharing by DOL, an agency may award a contract to an employer without being aware of or considering its past SCA violations. In April 2022, DOL reported that it had developed a tool that allows its SCA enforcement team to easily retrieve the former unique identifier for government contractors, and that they have advised regional staff to include this identifier with the debarment recommendations they submit to the national office. DOL also reported that it was developing, but had not completed, written guidance for its investigators and other field staff that will help ensure that contracting agencies are kept abreast of ongoing SCA investigations.

The SCA ensures that service workers on certain federal contracts receive pay and benefits that reflect current employment conditions in their locality. From fiscal years 2014 through 2019, the U.S. government obligated over $720 billion on service contracts covered under the SCA.

This testimony describes (1) what available data reveal about past SCA cases, (2) challenges DOL reports facing in enforcing the SCA, and (3) SCA implementation challenges. For the October 2020 report on which this testimony is based (GAO-21-11), GAO used a variety of methods including analyzing SCA enforcement data; reviewing relevant federal laws, policy, and guidance; reviewing key agency documents, such as DOL's fiscal year 2018-2022 strategic plan; and interviewing DOL officials.

In its October 2020 report, GAO made six recommendations to improve DOL's oversight and information sharing with contracting agencies, including USPS. GAO recommended that DOL analyze its use of enforcement tools; that DOL and USPS implement written protocols to improve communication with each other; and that DOL improve its information sharing with contracting agencies on SCA debarments and investigation outcomes. DOL and USPS generally concurred with the recommendations. This statement describes progress toward implementing GAO's provides updated information on the status of these recommendations as of April 2022..