According to the U.N., the conflict in Yemen is one of the world's worst humanitarian crises. The U.S. has long-standing security relationships with Saudi Arabia and the UAE—2 primary actors in the conflict—and has sold them weapons.

There have been reports of extensive civilian harm in Yemen. However, DOD has not reported and State could not provide evidence that it investigated incidents of potential unauthorized use of equipment transferred to Saudi Arabia or UAE.

State and DOD could use specific guidance for determining whether this equipment was used for unauthorized purposes. Our recommendations address this issue and more. 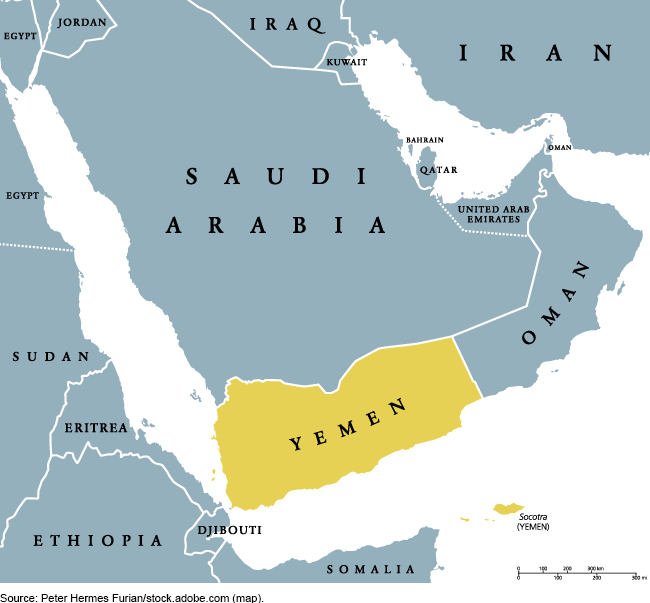 The Department of Defense (DOD) administered at least $54.6 billion of military support to Saudi Arabia and the United Arab Emirates (UAE) from fiscal years 2015 through 2021. The vast majority of this support was defense articles and defense services, including training, purchased by these countries through the Foreign Military Sales program. For example, sales of defense articles included helicopters, missiles, and small diameter bombs. DOD also provided advisory services to Saudi Arabia and UAE, some addressing civilian harm reduction.

Examples of Defense Articles That May Be Purchased through Foreign Military Sales: Helicopters, Missiles, and Small Diameter Bombs

DOD and the Department of State have not fully determined the extent to which U.S. military support has contributed to civilian harm in Yemen. State officials said they consider civilian harm and use of equipment when considering potential Foreign Military Sales for Saudi Arabia and UAE. In addition, DOD and State officials said they have made some efforts to understand the extent to which U.S.-origin defense articles were used in Yemen. However, despite several reports that airstrikes and other attacks by Saudi Arabia and UAE have caused extensive civilian harm in Yemen, DOD has not reported and State could not provide evidence that it investigated any incidents of potential unauthorized use of equipment transferred to Saudi Arabia or UAE. According to DOD policy, officials overseeing security cooperation efforts should be alert to and report any indication that U.S.-origin defense articles are being used against anything other than legitimate military targets. Additionally, State investigates alleged incidents of unauthorized use. DOD officials told GAO they lack guidance for reporting such incidents, and State officials could not provide specific guidance. Without such guidance, DOD and State may not be able to assess the extent to which U.S.-origin equipment has contributed to civilian harm in Yemen.

DOD submitted its report regarding U.S. and coalition partners' operations in Yemen on time and fully addressed all required elements that we reviewed, but State has not submitted all required certifications on Saudi Arabia's and UAE's actions in Yemen. DOD's unclassified report fully addressed four relevant elements required in its mandate, including whether any coalition partners committed gross violations of human rights. State submitted an initial certification in 2018 that the Saudi and Emirati governments had made efforts to reduce harm to civilians in Yemen, but did not submit two subsequent, required certifications. Although State's initial certification was complete, its supporting documentation—not required by law—did not address all elements required in the certification.

The United Nations has characterized the conflict in Yemen as one of the world's worst humanitarian crises. The U.S. has long-standing security relationships with Saudi Arabia and UAE—two primary actors in the conflict—and has continued to provide them military support, including for operations in Yemen since 2015.

Public law 116-283 calls for GAO to review U.S. military support to the Saudi-led coalition in Yemen. This report examines the (1) total financial value of military support provided by DOD to Saudi Arabia and UAE in fiscal years 2015–2021, (2) extent to which DOD and State have assessed the use of U.S. military support in Yemen and to which this support contributed to or reduced civilian harm, and (3) extent to which State certifications and a DOD report submitted in response to two congressional mandates were timely and complete. GAO analyzed DOD data and State and DOD documents, and interviewed agency officials in headquarters, Saudi Arabia, and UAE.

This is a public version of a sensitive report that GAO issued in April 2022. Information that DOD and State deemed sensitive has been omitted.

GAO is making four recommendations, including that State and DOD, respectively, develop specific guidance for investigating and reporting whether U.S.-origin equipment was used for unauthorized purposes in Yemen, and that State provide current information to Congress. DOD concurred with the recommendations. State agreed to develop specific guidance and to continue to regularly update Congress.