The Navy is trying to deploy five large, robotic submarines to do the dangerous job of laying undersea mines. But the effort is more than 3 years behind schedule and has exceeded costs by at least $242 million.

The Navy sees these robotic subs as a way to fill an urgent need—under DOD policy, this means ensuring that a solution can be delivered within 2 years. But the Navy didn't require the contractor to demonstrate that it was ready to build the subs within the planned cost and schedule. Seven years later, the Navy still doesn't have subs that meets its requirements.

A Test Version of the Robotic Submarine 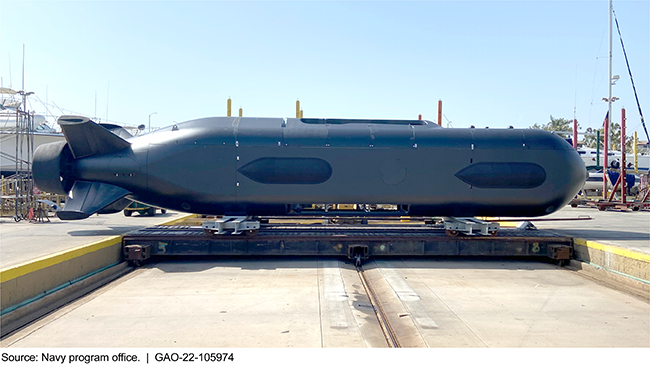 The Navy is attempting to rapidly deliver five Extra Large Unmanned Undersea Vehicles (XLUUV) to the fleet for deploying undersea mines without the need for sailors. However, the XLUUV effort is at least $242 million or 64 percent over its original cost estimate and at least 3 years late. The contractor originally planned to deliver the first vehicle by December 2020 and all five vehicles by the end of calendar year 2022. The Navy and the contractor are in the process of revising the delivery dates. But both expect the contractor to complete and deliver all five vehicles between February and June 2024.

The contractor did not demonstrate its readiness to fabricate XLUUV because it was not required to do so. For acquisition programs, DOD and Navy typically conduct a production readiness review. While XLUUV is a prototype and not an acquisition program, the Navy plans to field the vehicles quickly. Key differences between the XLUUV and the contractor's prototype, the Echo Voyager, required the contractor to redesign critical components. Rather than address issues before starting fabrication, the contractor did not identify the full impact of these issues until after fabrication began. Then, significant delays were exacerbated by the COVID-19 pandemic. Further, the Navy has begun assessing the possibility of adding more capability and vehicles to this effort. If the Navy forgoes a production readiness review for its next XLUUV purchase, it risks beginning fabrication without information to assess the contractor's cost, schedule, and performance targets.

The Navy determined that XLUUV was critical to fulfilling an emergent need, which, under DOD policy, generally requires a capability be provided within 2 years. However, the Navy did not develop a sound business case, including cost and schedule estimates, to ensure that it could deliver the vehicles quickly to the fleet because XLUUV is a research and development effort. According to DOD urgent capability acquisition best practices, an acquiring organization should make cost and schedule trade-off decisions to get solutions to the fleet faster. Without more complete cost and schedule estimates, the Navy does not have the information it needs for decision-making and, thus, could continue experiencing cost overruns and schedule delays as it builds the XLUUV.

The Navy is developing the XLUUV in response to a need to lay undersea mines. This ability could prevent an adversary from accessing strategic waterways and entry points on land. The Navy considers uncrewed autonomous vehicles to be prototypes that it is pursuing as a research and development effort. However, these XLUUVs are expected to serve a key role in the fleet and could protect sailors from performing dangerous missions.

The joint explanatory statement accompanying the Consolidated Appropriations Act, 2022, included a provision for GAO to review the XLUUV and the Navy's adherence to acquisition best practices. This report assesses (1) the extent to which the XLUUV is meeting cost and schedule targets, and (2) the Navy's efforts to develop, design, and produce the XLUUV compared to leading practices for product development.

GAO compared the XLUUV acquisition plan with the President's Budget for fiscal year 2023; compared XLUUV contracts, documents, and cost and schedule outcomes to leading practices for product development; and interviewed officials responsible for the XLUUV effort.

GAO is making two recommendations to the Navy, to (1) conduct production readiness reviews prior to additional purchases beyond the five XLUUVs, and (2) develop cost and schedule estimates to improve the feasibility of acquiring the vehicles in a timely manner. The Navy concurred with both of the recommendations.