Suicide deaths and attempts within the military community are devastating events that can also harm unit morale and readiness. Servicemembers assigned to remote locations outside the contiguous U.S. can experience isolation, less access to mental health resources, and other challenges that may increase their suicide risk.

We testified before a Senate subcommittee about our examination of suicide data for servicemembers at remote installations, prevention efforts, and more. DOD has not fully assessed suicide risk at these locations. Our upcoming report will recommend ways to address this and other issues.

A Suicide Prevention Month Display in 2021 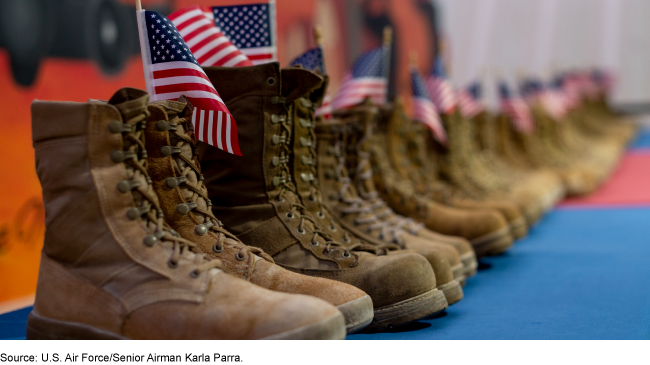 The Department of Defense's (DOD) suicide prevention and response efforts have faced challenges, according to GAO's preliminary analysis. These include assessing suicide risk at remote installations outside the contiguous U.S. (OCONUS), implementing key prevention activities, integrating prevention in primary care, and providing response guidance and training for key personnel.

Policies, programs, and activities. DOD and the military services have established suicide prevention policies, programs, and activities—such as training and mental health resources—for servicemembers and dependents, including those assigned to remote OCONUS installations. However, gaps exist in implementation. For example, the Army, the Navy, and the Marine Corps have not ensured implementation of some prevention activities, such as establishing required prevention teams at installations. By establishing oversight mechanisms, these services may have greater assurance that such activities are implemented across all installations, including remote OCONUS locations.

Privacy protection and suicide prevention in primary care. DOD and the military services have established privacy protections for servicemembers and dependents seeking suicide prevention care. DOD has also taken steps to integrate suicide prevention into primary care by establishing screening requirements and embedding behavioral health personnel in some primary care clinics. However, GAO's preliminary analysis found that DOD has experienced staffing shortages for these personnel, in part because it has not developed a strategy to address hiring challenges. By developing such a strategy, DOD can enhance the provision of behavioral health care to servicemembers and dependents, including at remote OCONUS installations.

Suicide deaths and attempts within the military community are devastating events for families. They can also harm unit morale and readiness. Remote OCONUS installations may pose challenges that increase suicide risk.

This statement examines, among other things, (1) the incidence of suicide and related risk factors among servicemembers at remote OCONUS installations during 2016-2020. It also discusses the extent to which DOD and the military services have, in relation to remote OCONUS installations (2) established and ensured implementation of policies, programs, and activities that address suicide prevention; (3) established privacy protections for servicemembers and dependents seeking suicide prevention care and integrated suicide prevention into primary care; and (4) established guidance and training for key personnel for responding to suicide deaths and attempts.

This preliminary analysis is included in GAO's draft report, which was provided to DOD in March for review and comment. For that report, GAO analyzed data, policies, and guidance; reviewed documentation from 57 installations; and interviewed DOD and military service officials.

Based on preliminary analysis, GAO is making various recommendations, including that DOD establish a process to assess suicide risk at remote OCONUS installations, three services establish oversight of installations, and DOD develop a strategy for hiring key behavioral health personnel and improve guidance and training for commanders.