We testified that NASA's success with future space telescope projects will depend on its ability to: 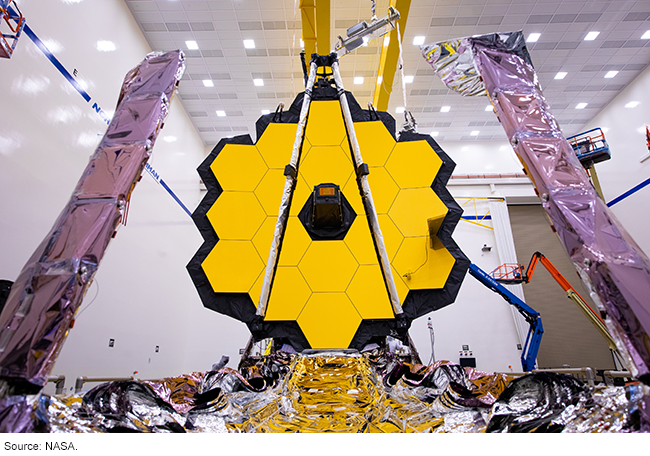 The National Aeronautics and Space Administration (NASA) relies on complex instruments and spacecraft to accomplish its missions—including to better understand the universe and our place in it. NASA's astrophysics projects currently include three major space telescopes (see figure).

Spectro-Photometer for the History of the Universe, Epoch of Re-ionization and Ices Explorer (SPHEREx) set cost and schedule baselines in January 2021. Technical problems pushed the critical design review to January 2022. 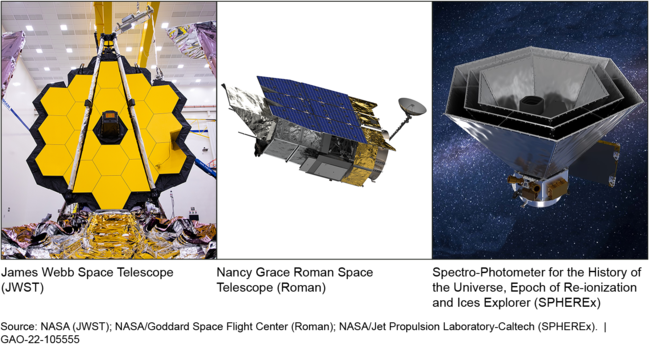 Three lessons learned from GAO's work, some of which NASA has adopted, provide NASA an opportunity to strengthen management of future space telescopes.

Manage cost and schedule performance for large projects to limit portfolio implications for portfolio. Increases associated with NASA's most costly and complex missions have cascading effects on the rest of the portfolio, and JWST's cost and schedule increases over the years have had outsized effects.

The projects in NASA's current portfolio of major space telescopes—JWST, Roman, and SPHEREx—have roots in past decadal surveys on Astronomy and Astrophysics from the National Academies of Sciences, Engineering, and Medicine. NASA is now considering the results of the National Academies' 2020 decadal survey, which may spur new projects in this portfolio.

NASA has made improvements in acquisition management in recent years, but it remains a long-standing challenge for the agency.

This statement reflects GAO's observations on (1) the current status of NASA's major telescope projects, and (2) lessons learned that can be applied to NASA's management of its future telescope projects as it considers the results of this decadal study. This statement is based on ongoing work on the status of NASA's major projects, which is planned to be published in Spring spring 2022, and past GAO reports on JWST and NASA's acquisitions of major projects.

As of November 2021, NASA has not fully addressed eight open priority recommendations related to monitoring program costs and execution. Those recommendations were detailed most recently in a report to the NASA Administrator in June 2021.