Virtual currency is increasingly used in human and drug trafficking, according to our review of agency records and interviews with officials. 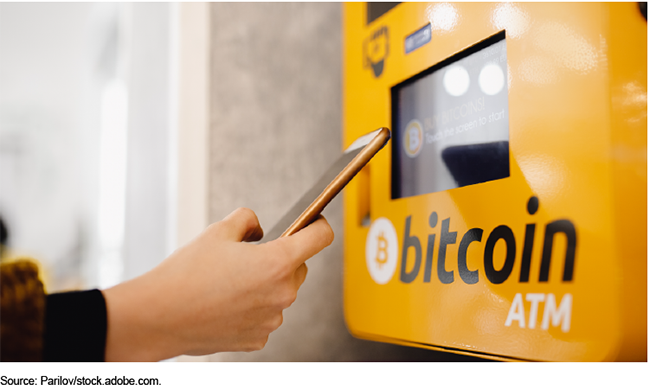 This is a public version of a sensitive report that GAO issued in September 2021. Therefore, this report omits sensitive information and data on selected federal agencies' activities to counter human and drug trafficking, associated use of virtual currency, and related challenges.

Example of Virtual Currency Kiosk, Which May Be Used in Human and Drug Trafficking

Selected federal agencies have taken actions to counter the illicit use of virtual currency in human and drug trafficking but face challenges. For example, FinCEN and the Internal Revenue Service (IRS) oversee virtual currency entities. FinCEN imposes requirements for operators of virtual currency kiosks that are used to exchange virtual currencies for cash and are found in various locations such as convenience stores (see fig.). While kiosk operators are required to register with FinCEN, they are not required to routinely report the specific locations of their kiosks. This limits federal agencies' ability to identify kiosks in areas that have been designated as high risk for financial crimes and could involve human and drug trafficking. Reviewing registration reporting requirements and taking appropriate action, as needed, to better identify individual kiosk locations by operator could help FinCEN and IRS identify high-risk kiosk operators to monitor for compliance, while also improving information law enforcement has available to identify potentially illicit transactions.

GAO made 2 recommendations in this public report, including that FinCEN and IRS review virtual currency kiosk registration requirements. FinCEN and IRS concurred.