U.S. Customs and Border Protection uses 2 public-private partnership programs to expand its port services. One allows partners such as port authorities to reimburse CBP for additional work outside regular hours. Another accepts donations for infrastructure improvements, which could speed up CBP's work.

CBP added 27 reimbursement partnerships and 4 donation partnerships, bringing the totals to 263 and 43 since 2013. Most focus on processing air freight, cargo, and travelers. 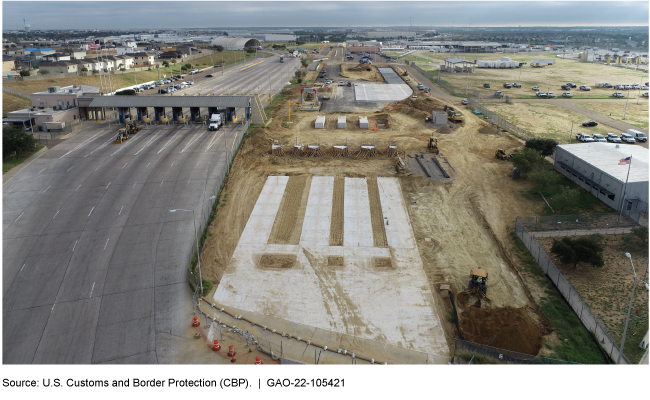 Since GAO's January 2021 report, U.S. Customs and Border Protection (CBP), within the Department of Homeland Security, continued to expand its public-private partnership programs—the Reimbursable Services Program (RSP) and the Donations Acceptance Program (DAP). The RSP allows partners, such as port authorities or local municipalities that own or manage ports, to reimburse CBP for providing services that exceed CBP's normal operations, such as paying overtime for CBP personnel that provide services at ports of entry (POE) outside regular business hours. The DAP enables partners to donate property or provide funding for POE infrastructure improvements.

Regarding the RSP, since our January 2021 report, CBP selected an additional 27 RSP applications for partnerships, bringing the total of RSP selections to 263 since fiscal year 2013. There are many factors that CBP considers when reviewing applications for the RSP, including operational feasibility, and CBP may choose to not select certain applications. According to officials, CBP denied two RSP applications since GAO's January 2021 report. CBP officials said they denied these applications because the proposed agreements were not operationally feasible. As of October 2021, CBP and its partners executed 165 Memorandums of Understanding (MOU) from RSP partnerships that they entered into since fiscal year 2013. These MOUs outline how agreements are to be implemented at one or more POE. Of those 165 MOUs, 11 cover agreements at land POEs, 49 cover agreements at sea POEs, and 105 cover agreements at air POEs. The majority of MOUs executed since 2013 were at air POEs and focused on freight, cargo, and traveler processing. Although the number of RSP partnerships has increased, the growth in the total number of reimbursable CBP officer assignments, officer overtime hours, and reimbursed funds have continued to be less than in 2019, before the Coronavirus Disease 2019 (COVID-19) pandemic. CBP officials said that although the number of requests for RSP services is currently below prepandemic levels, the number of requests for RSP services and the number of applications that CBP receives were beginning to increase.

Regarding DAP, since our January 2021 report, CBP entered into four new donation acceptance partnerships, bringing the total number of agreements to 43 since fiscal year 2015. Partners span a variety of sectors such as state and local governments, private companies, and airline companies. Correspondingly, donations served a variety of purposes such as expanding inspection facility infrastructure, providing biometric detection services, and providing luggage for canine training. As of September 2021, 30 of 43 of these projects, or 70 percent, were at land POEs. CBP officials estimated that the total value of all donations entered into between September 2015 and October 2021 was $216.8 million.

On a daily basis in fiscal year 2021, over 491,000 passengers and pedestrians and nearly 87,000 truck, rail, and sea containers carrying goods worth approximately $7.7 billion entered the United States through 328 U.S. land, sea, and air POEs, according to CBP. To help meet demand for CBP inspection services, since 2013, CBP has entered into public-private partnerships under the RSP and DAP. Section 482 of the Homeland Security Act of 2002, as added by the Cross-Border Trade Enhancement Act of 2016, and amended by the National Defense Authorization Act for Fiscal Year 2022, includes a provision for GAO to biennially review the agreements along with the funds and donations that CBP has received under the RSP and DAP. Under the prior annual reporting requirement, GAO issued four annual reports on the programs—in January 2021, January 2020, March 2019, and March 2018. This fifth annual report updates key information from GAO's January 2021 report by examining the status of CBP public-private partnership program agreements, including the purposes for which CBP used the funds and donations from these agreements in 2020 and 2021. GAO collected and analyzed information on any new RSP agreements, DAP agreements, and MOUs for both programs for 2020 and 2021, excluding those analyzed in GAO's January 2021 report. GAO also analyzed data on use of the programs and interviewed CBP officials to identify any significant changes to how the programs are administered.