The internet has fundamentally changed how local news media operate—particularly by reducing the circulation and revenue of many local newspapers.

We convened a 2-day workshop and interviewed journalists, academics, and other experts about the future of local media. The participants discussed strategies news outlets use to adapt to the digital environment and policy proposals to boost the viability of local journalism. For example, direct government funding and tax incentives targeting nonprofit news organizations could help support public interest journalism while keeping citizens engaged and officials accountable. 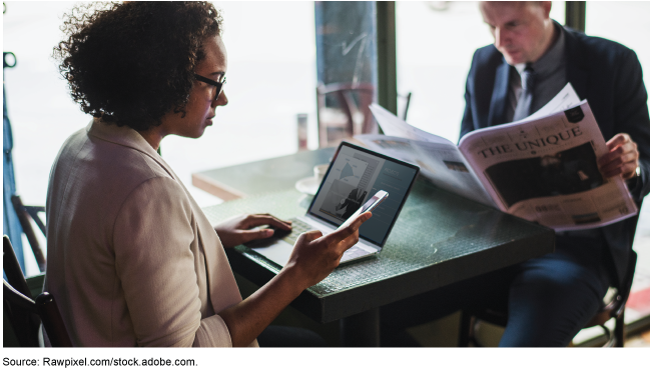 The digital transformation over the last few decades has changed the economic landscape for local news media—most notably, by reducing the circulation and revenue of many local newspapers. This market disruption is attributable to several factors, according to research and participants of GAO's February 2022 workshop on the viability of local journalism. Consumers increasingly prefer to access news in digital rather than print formats, and the internet has given consumers access to many more sources of news and information, often for free. In addition, web-based marketplaces have replaced classified advertising that traditionally had been a key source of newspaper revenue. Many businesses now use digital advertising, which can be cheaper and better targeted than print advertising. As a result of these factors, local newspapers are no longer necessarily the primary source of news and information for local communities, nor the main channel for advertising by local businesses.

Local news media outlets use different strategies and organizational arrangements to adapt to the digital transformation. For example, local news organizations are seeking to diversify their revenue sources, such as by offering membership or receiving donations. Also, some news organizations are converting from private firms to cooperatives or community-based organizations, or to nonprofit organizations, to take advantage of existing tax incentives. According to stakeholders, the nonprofit model, financed by a combination of federal funding and philanthropy, could be a viable strategy for targeting low-income communities that find paid access to news restrictive. Further, media outlets are engaging in strategic partnerships to facilitate growth or to share resources.

Some workshop participants believe that public policies should focus on addressing potential market failure in providing public interest journalism and existing inequities in its provision. Digital transformation may have increased the risk of market failure because this type of news is now less frequently bundled with high revenue-generating content in a print newspaper—an approach that allowed for cross-subsidization. According to literature and participants, direct government funding and tax incentives supporting nonprofit news organizations can be useful in addressing market failure with sufficient safeguards to ensure independence. On the other hand, indirect government funding, such as tax credits and government advertising, can provide support but is broader in scope and does not specifically target public interest journalism.

Policymakers in the U.S. and other countries have also sought to alleviate the adverse impact of market disruption brought on by the internet through policies that make certain large internet platforms pay news publishers for using their content. However, literature, stakeholders, and experts expressed concerns that the policies may be based on insufficiently supported claims, and if not properly designed, could result in unintended consequences for smaller publishers and consumers. Experts advised that the primary goal of public policies should be to preserve the function of journalism rather than specific local news outlets. Experts conveyed that the main goal of journalism is to have a well-informed society, and policies that aim to support this goal need to be innovation-friendly, forward-looking, and inclusive.

With the digital transformation in recent decades, many local newspapers—a significant part of local journalism— have struggled to remain economically viable. More than 2,000 local newspapers have closed since the early 2000s. Many more have substantially cut their operations. While broadcast and digital media have partially filled the gap, the overall decline in local news and public interest journalism, in particular, concerns many policymakers and others. Public interest journalism covers key issues of public significance, such as education and public safety, and can help keep citizens engaged and hold government officials accountable.

GAO conducted a literature review and interviewed agency officials, academics, and representatives of media and technology companies, industry groups, and a think tank, as well as other stakeholders. GAO also convened a 2-day workshop in February 2022 with 40 participants who had a variety of backgrounds and expertise. This included academics, legal scholars, independent and affiliated journalists, publishers, and representatives of nongovernmental organizations and technology companies.