The Navy is planning for a total of 35 Littoral Combat Ships, which are designed to operate in shallow waters close to shore.

But the Navy hasn't demonstrated that this type of ship can perform its intended missions. For example, operational testing found challenges in the ship's defenses. Also, some key equipment has failed, and the Navy is behind schedule in developing capabilities such as mine countermeasures.

The Navy is taking steps to address these and other issues, but doesn't have a comprehensive plan to resolve them. We recommended making such a plan and tying the decision to use the ships to the progress made in addressing the issues. 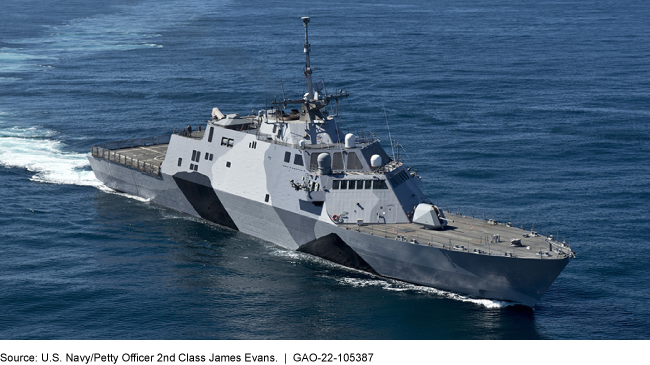 The Littoral Combat Ship (LCS) fleet has not demonstrated the operational capabilities it needs to perform its mission. Operational testing has found several significant challenges, including the ship's ability to defend itself if attacked and failure rates of mission-essential equipment. The Navy is also behind schedule in developing the various mission modules—different configurations of key systems for different missions, such as mine countermeasures—for the LCS. In addition, GAO found that the LCS has frequently encountered challenges during deployments. The Navy has begun to take steps to address some of these issues, but it does not have a comprehensive plan to address the various deficiencies identified during testing and deployments. Without a comprehensive plan to address deficiencies, perform adequate testing of the mission modules, and implement lessons learned from completed deployments, the LCS will remain at risk of being unable to operate in its intended environment. Further, gaps between desired and demonstrated capabilities have substantial implications for the Navy's ability to deploy the LCS as intended. Until the Navy makes future operational deployments contingent on progress in addressing gaps between desired and demonstrated capabilities, the LCS will continue to be dependent in combat and require protection by multi-mission combatants.

The Navy has implemented eight of the 10 recommendations from its 2016 Review of the LCS program. Among other things, it has implemented new approaches for assigning and training sailors for the LCS crew. However, the Navy is facing challenges in implementing a revised maintenance approach, under which Navy personnel will perform some maintenance currently being conducted by contractors. Until the Navy determines the specific tasks Navy personnel will perform, it risks not being able to meet the maintenance needs of the LCS, thus hindering the ships' ability to carry out their intended missions.

The Navy's operating and support (O&S) cost estimates for the LCS do not account for the cost implications of its revised maintenance approach. Specifically, the Navy has not assessed the cost implications of its revised maintenance approach, and thus lacks a clear picture of its impact on O&S costs. Some of the Navy's O&S actual cost data are also incomplete and inaccurate. For example, the Navy reported on each O&S cost element for the seaframes in its Visibility and Management of Operating and Support Costs database, but it reported only on the maintenance cost element for the mission modules. Further, the Navy does not report maintenance costs separately for each mission module, but instead totals those costs for all mission modules and divides by the number of seaframes in the fleet. Without complete and accurate cost data, the Navy is at risk of failing to anticipate O&S cost increases that could create challenges in funding LCS as intended or delivering capabilities when expected.

Finally, the Navy has not updated its O&S cost estimates to reflect its revised operational and sustainment concepts and has not incorporated actual cost data into some of its estimates. Without complete information on the cost of implementing the revised operational and sustainment concepts, and the use of actual cost data, the Navy will not be able to analyze the differences between estimates and actual costs—important elements for identifying and mitigating critical risks to the LCS.

The LCS is designed to operate in shallow waters close to shore—known as the littorals. The Navy estimates it will cost over $60 billion to operate and support the 35 LCS it plans to build, including the 17 it has already delivered.

A House report accompanying a bill for the National Defense Authorization Act for Fiscal Year 2020 included a provision for GAO to review the LCS's affordability and sustainability. This report examines the extent to which the Navy has (1) demonstrated that the LCS has the operational and warfighting capabilities to perform its missions; (2) implemented the recommendations in the Navy's 2016 Review; and (3) updated its cost estimates to account for revised operational and sustainment concepts.

GAO reviewed relevant laws, regulations, Navy guidance; analyzed LCS cost data for fiscal years 2009 to 2019; and interviewed relevant officials. This is a public version of a sensitive report that GAO issued in August 2021. Information that the Navy deemed sensitive has been omitted.

GAO recommends, and the Navy concurs with, developing a comprehensive plan to address deficiencies, performing adequate testing of the mission modules, and implement lessons learned; making deployments contingent on progress in addressing gaps in capabilities, and determining tasks Navy personnel and contractors will perform, among others.

GAO also recommends, and the Navy partially concurs with, updating and improving LCS cost data, as discussed in the report.