As the number of women veterans has grown—to about 2 million in FY2021—so have concerns about homelessness in this population. A VA program helps women—and other veterans facing homelessness—get services such as emergency housing and child care from a network of service providers.

VA collects feedback from veterans about the program and has used it to make improvements that may be especially helpful for women. But feedback provided to VA—and women veterans we spoke with—indicated potential problems with service provider quality.

The VA is working to better oversee service providers. We recommended it share its progress with Congress. 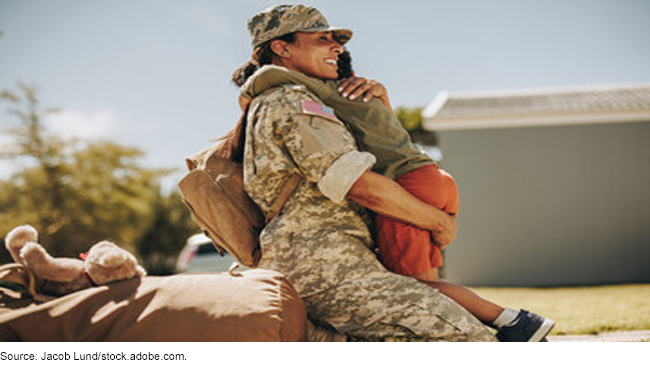 From fiscal years 2017 through 2021, the Department of Veterans Affairs' (VA) Supportive Services for Veteran Families (SSVF) program served about 11,100 women veterans annually, making up about 13 percent of all veterans served each year. About 40 percent of these women veterans had children with them. The program supports women veterans through (1) rapid re-housing to help those who are experiencing homelessness transition to permanent housing, and (2) prevention services to help veterans remain in their home as they resolve a housing crisis. The program prioritizes serving veterans who are experiencing homelessness and hence, about 57 percent of women veterans in SSVF were enrolled for rapid re-housing (see figure). About 56 percent of women veterans in SSVF received temporary financial assistance to help with housing costs. For example, SSVF provided an annual average of $911 to women veterans for help with paying rent, compared with $789 for men. SSVF officials said women veterans are more likely than men to be living with children and thus, require larger, more expensive apartments.

Percentage of Veterans in SSVF Enrolled for Rapid Re-Housing or Homelessness Prevention by Gender, on Average Each Year, Fiscal Years 2017-2021

SSVF uses veterans' feedback to identify and address service needs, and is taking steps to enhance its oversight of provider quality. Based on feedback, SSVF provided additional funding to service providers to hire staff to help veterans navigate health care and legal systems. Staff from five of the 10 service providers GAO interviewed described how these new efforts may benefit women veterans, such as those seeking health care for sexual trauma. SSVF also uses periodic audits and other tools to oversee the quality of service providers. However, GAO found that several providers continually ranked lower than their peers when veterans were asked about quality of services and courteousness of staff. Further, four of the six women veterans in GAO's discussion groups who had received SSVF services described feeling demoralized or shamed by VA or provider staff. SSVF officials outlined recent efforts to enhance oversight in this area, such as a new process implemented in fiscal year 2022 that requires service providers to address veteran feedback from surveys. Evaluating these new efforts would help SSVF determine whether additional actions are needed to improve provider quality. Reporting to Congress and the public on the results would be consistent with VA's commitment to accountability and transparency.

Past research shows that women who are experiencing homelessness are more likely to be veterans than those in the general population. Further, they are more often than men accompanied by children, according to VA. SSVF aims to promote housing stability among veterans facing homelessness, including their families. The program uses a nationwide network of nonprofit service providers to help with housing needs, services, and benefits, such as income support and child care.

The Deborah Sampson Act of 2020 included a provision for GAO to review whether SSVF is meeting the needs of women veterans. GAO examined (1) the characteristics of women veterans who participated in SSVF and services they received; and (2) how VA ensures that SSVF service providers meet the needs of veterans, including women.

GAO analyzed VA data on veterans served by SSVF from fiscal years 2017 through 2021, and interviewed VA officials and SSVF service providers in 10 localities. These localities were selected to achieve variation in factors including concentrations of veterans facing homelessness and geographic location. GAO also conducted four discussion groups with women veterans who had faced homelessness in the last 5 years. GAO reviewed relevant federal laws, policies, and VA guidance, as well as literature on women veterans and homelessness.

GAO recommends that VA evaluate and report to Congress and the public on SSVF's efforts and progress in improving service provider quality. VA agreed with GAO's recommendation.