Customs and Border Protection (CBP) has seen a significant increase in the number of individuals they apprehend between U.S. ports of entry along the southwest border. This has resulted in overcrowding and difficult humanitarian conditions in its facilities.

CBP monitors the care of individuals in its custody in various ways. For example, staff are required to conduct and document welfare checks every 15 minutes for individuals who are sick or injured. However, Border Patrol (a part of CBP) does not have a mechanism to verify that staff have done so across field locations.

We recommended that Border Patrol implement such a mechanism.

U.S. Border Patrol's Apprehensions along the Southwest Border from FYs 2019 through 2021 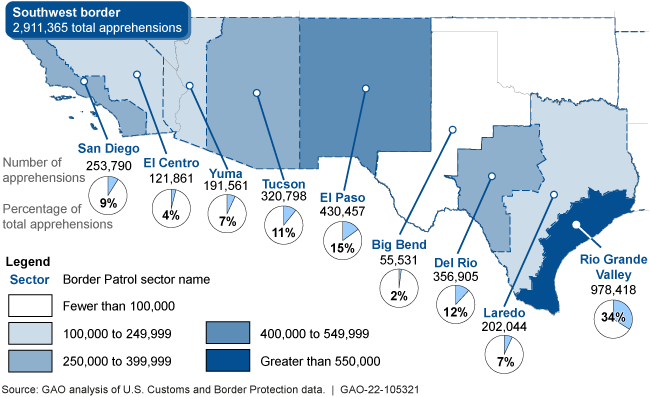 In October 2015, U.S. Customs and Border Protection (CBP) issued its National Standards on Transport, Escort, Detention and Search (TEDS). The standards govern how CBP—including the Office of Field Operations (OFO) and U.S. Border Patrol—should transport, escort, detain, or search individuals in short-term custody. They also govern how CBP should handle personal property and provide care for at-risk individuals, among other things.

CBP uses various mechanisms, at multiple levels of the agency, to monitor the care of individuals in short-term custody and help ensure that CBP personnel are adhering to TEDS. For example, staff at OFO ports of entry and Border Patrol stations—where holding facilities are located—are responsible for performing routine custodial actions. This includes providing meals and conducting periodic welfare checks of those in its custody. These staff also are to use electronic systems to record and manage data of their monitoring activities for individuals in custody. Officials at the OFO field office, Border Patrol sector, and headquarters levels also periodically conduct inspections of facilities and are responsible for monitoring custodial action data.

CBP guidance on TEDS requires staff to conduct welfare checks every 15 minutes for individuals who are sick or injured. It also calls for CBP to develop a method to ensure compliance with those requirements. However, Border Patrol does not have a mechanism to ensure compliance. Border Patrol officials stated that they believe the agency is meeting the intent of the requirements through activities that occur at the field-level. However, there is no agency-wide mechanism to verify that agents have conducted and recorded the required checks across field locations. Without such a mechanism, Border Patrol does not have insights across the agency on its compliance with the required welfare checks for individuals who face health risks.

In recent years, CBP has experienced a significant increase in the number of individuals encountered at or apprehended between U.S. ports of entry along the southwest border. This has resulted in overcrowding and difficult humanitarian conditions in its facilities. According to CBP data, the agency encountered or apprehended about 1.73 million individuals in fiscal year 2021 along the southwest border.

The 2021 House Appropriations Committee Report for the Department of Homeland Security (DHS) includes a provision for GAO to review CBP processes for overseeing its personnel's adherence to TEDS. This report addresses the extent to which CBP monitors adherence to its TEDS standards, among other objectives.

GAO reviewed CBP documentation including the TEDS standards and CBP's 2019 memo on monitoring requirements for certain at-risk populations. GAO also interviewed DHS and CBP officials in headquarters and at 15 field locations selected based on a mix of criteria including geographic location and numbers of encounters or apprehensions.

GAO recommends that Border Patrol develop and implement a mechanism to monitor the agency's compliance with welfare check requirements for certain at-risk individuals in custody. DHS concurred with this recommendation.