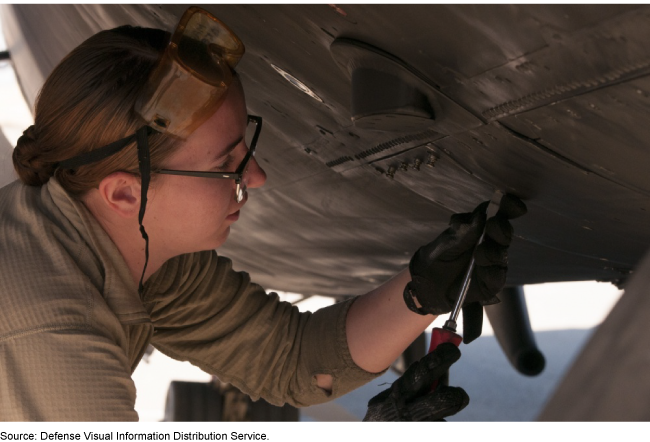 Transitioning out of the military can present many challenges, one of which can be transferring military skills and experience to civilian employment. Officials described various efforts that the Department of Defense (DOD) has undertaken to help address the challenges that servicemembers may face when transferring their military skills to the civilian workforce. For example, DOD developed two programs:

In an effort to monitor its two Credentialing Programs—COOL and USMAP—DOD tracks program participation and completion. For example, DOD data showed that in fiscal year 2020, approximately 18,200 servicemembers participated in the COOL program and approximately 12,700 completed one or more credential. In the same year, for USMAP, a total of about 111,400 servicemembers participated and about 17,400 completed an apprenticeship. Additionally, GAO identified two studies from 2015 that assessed factors of effectiveness for COOL and USMAP. While the two studies provided some evidence about effectiveness of these programs for some of the services, DOD does not have current evidence of program effectiveness across all services, resulting in an evidence gap. DOD officials told GAO that they do not yet plan to develop new evidence to more fully assess these programs because the Department is waiting to implement the new DOD Instruction agency-wide before doing so. Evidence-building comprises four activities—assessing existing evidence and identifying any need for additional evidence; determining which new evidence to generate, when, and how (i.e., prioritizing new evidence); generating that evidence; and using evidence in decision-making—according to GAO analysis of our prior work and Office of Management and Budget information. By taking steps to build appropriate evidence about program effectiveness DOD will be better positioned to demonstrate whether the programs are achieving their intended results and ensure that resources are being targeted appropriately.

Approximately 200,000 servicemembers transition from military service to civilian life each year and may experience difficulty finding civilian jobs after leaving the military. Servicemembers typically receive extensive, high-quality training and experience during their military careers and acquire skills that can prepare them for a wide range of civilian jobs. However, although many of these acquired skills translate to the civilian workforce, servicemembers and veterans may face costly retraining to obtain credentials for civilian occupations.

The William M. (Mac) Thornberry National Defense Authorization Act for Fiscal Year 2021 includes a provision for GAO to report on the transferability of military skills and experience.

This report examines (1) the steps DOD has taken to address reported challenges to transferring military skills and experience to the civilian workforce and (2) what is known about the effectiveness of DOD's Credentialing Programs, including their effect on military recruitment and retention.

To address these questions, GAO reviewed DOD documents and policies, as well as relevant literature that was published by national organizations familiar with the military or the workforce. GAO conducted interviews with DOD and Department of Labor (DOL) officials and with other national stakeholders knowledgeable about the workforce and credentialing. GAO also reviewed data for fiscal year 2020 on DOD's Credentialing Programs (COOL and USMAP) as well as goals, performance measures, and outcomes as noted in DOD policy and guidance documents for both programs. In addition, GAO reviewed two studies evaluating the effectiveness of these programs.

Finally, GAO reviewed examples of credentials issued by other federal agencies that may be used in non-federal employment.

GAO is recommending that the Secretary of Defense should take steps to develop evidence that would allow the Department to assess the effectiveness of its Credentialing Programs.