Every year DOD disposes of "major end items" such as Humvees. Some may be sold or given to other agencies after being demilitarized. Items are assigned a demilitarization code that determines the required action—the degree of disassembly, for example.

Code application was mostly consistent in the 437 categories we examined. However, in 13 cases the same items were assigned different codes and there was no process for reconciling differences.

Also, officials from 3 military services told us most of the Humvees they turned in were destroyed, because the officials lacked guidance on other options. 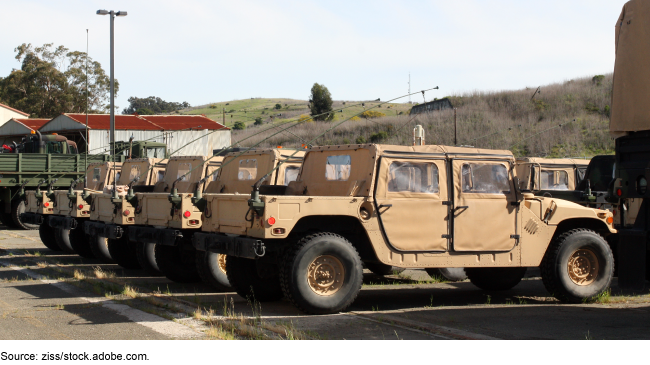 Each year the Department of Defense (DOD) divests itself of thousands of items of property, which includes major end items, such as High-Mobility Multipurpose Wheeled Vehicles, other tactical vehicles, and certain types of cargo trucks and trailers, through the defense materiel disposition program. DOD consistently applied demilitarization codes for most, but not all, of the major end items GAO examined for fiscal years 2019–2021. Specifically, of the codes for the 437 national stock numbers GAO examined, 413 were consistent and 24 were not. Of the 24, 13 did not have documentation explaining the rationale for the differences in codes across DOD's databases, including those maintained by the military services. The Defense Logistics Agency (DLA) is responsible for ensuring that demilitarization codes are consistent across DOD and documenting any code changes. However, DLA officials were unsure how the inconsistencies GAO identified occurred because they do not have a reconciliation process that enables DLA to identify and reconcile codes across DOD's various databases. Without fully documenting changes, including pending changes, to demilitarization codes to ensure consistent use across the department, DOD risks that major end items, including sensitive items, may be inadvertently released to the general public or that items eligible for release may be needlessly destroyed.

DOD guidance states that each military service is responsible for determining how to dispose of items it no longer needs. However, military service officials stated that they lacked guidance on what factors to consider when making disposition decisions for major end items, such as High-Mobility Multipurpose Wheeled Vehicles. Three military services turned in their unneeded High-Mobility Multipurpose Wheeled Vehicles to DLA, where most were eventually destroyed. According to Army officials, the Army reclaimed usable parts, such as engines, transmissions, and tires, providing DLA with little more than chassis. Military service officials stated that they opted to turn in the items because of the lack of guidance on assessing other disposal options. In the absence of such guidance, there is the risk that the expected outcomes of DOD's materiel disposition program—safeguarding national security interests, minimizing the destruction of government property, and optimizing monetary return to the U.S. government—will not be achieved.

DLA manages, controls, and oversees DOD's materiel disposition program for property, including major end items, the department no longer needs. On the basis of an assigned code, many of these items must be demilitarized before being reused, transferred to other agencies, donated, sold, or destroyed.

GAO makes two recommendations that (1) DOD establish a process to review and reconcile demilitarization codes and document changes and (2) develop guidance on how to, when disposing of major end items, assess potential risks to national security and avoid unnecessary destruction, among other things. DOD did not concur with either recommendation stating DLA's processes mitigate coding inaccuracies, the military services share responsibility for inaccuracies, and DLA lacks responsibility for assessing risk. In response, GAO clarified both recommendations and maintain they remain valid.