Our 20th annual assessment of DOD's weapons acquisitions (which are on our High Risk List) found that DOD is working to improve how fast it develops and delivers weapon systems.

But many weapon programs continue to face delays—partly because DOD didn't have the right information at key decision points about the weapon system's technology, design, or production.

We also recommended that DOD clarify when programs should assess risks to the defense industrial base (the companies that develop and manufacture weapon systems). For instance, some parts are made by a single supplier and could become unavailable if that supplier goes out of business. 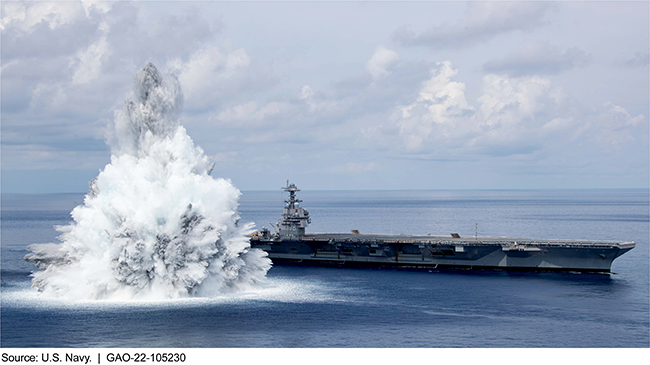 For over 20 years, GAO has assessed the Department of Defense's (DOD) weapon programs and noted significant changes in its acquisition policies and practices. GAO's first assessment in 2003 highlighted challenges, such as committing billions of taxpayer dollars before obtaining key information, including reliable cost estimates and proven designs. Yet these challenges still hinder many programs. And they slow the department's current emphasis on delivering capabilities to the warfighter faster.

GAO found that MDAPs continue to struggle with schedule delays. Over half of the 29 MDAPs that GAO reviewed that had yet to deliver capability reported delays during the past year (see figure). The lack of future year funding data in the fiscal year 2022 budget request precluded GAO from assessing the MDAP portfolio's cost performance this year.

a Five programs reported delays but stated the total delay was unknown at the time of GAO's review.

GAO observed a correlation between programs that obtained certain knowledge at key points and better cost and schedule outcomes. Knowledge-based acquisitions attain crucial information about topics such as technology maturity before proceeding beyond key points. But the majority of MDAPs GAO reviewed continue to not fully achieve knowledge that informs key investment decisions. This finding is consistent with GAO's reporting over the last 20 years.

Further, MTA programs' approaches to obtaining knowledge pose potential risks. DOD is increasing its use of the MTA pathway. Yet, GAO observed that these programs generally do not plan to attain sufficient product knowledge before starting follow-on efforts, falling short of leading acquisition practices. This approach increases the risk that these follow-on efforts may encounter cost, schedule, or technical challenges during development or production.

Additionally, GAO's past work has emphasized the importance of modernizing DOD's software development efforts. The department built on ongoing modernization initiatives over the past year. For example, DOD leadership has emphasized key practices, such as iterative development. However, most of the 39 programs that reported using a modern software development approach deliver working software for user feedback more slowly than recommended by industry's Agile practices, which call for rapid, frequent delivery of software and fast feedback cycles (see figure). As a result, these programs may lose out on some of the benefits of using a modern approach.

GAO's past work has also found that cybersecurity for weapon systems is a critical area that DOD must improve. However, GAO continued to find programs not fully implementing recommended cybersecurity practices, such as testing.

GAO is making two recommendations including that DOD update its industrial base assessment instruction to define the circumstances that would constitute a known or projected problem or substantial risk that a necessary industrial capability may be lost. DOD concurred with the recommendations.

The Department of Defense invests billions of dollars annually to develop weapon systems, such as...
Blog Post