The Department of Defense has closed bases through a process called Base Realignment and Closure (BRAC), most recently in 2005-2011. DOD must clean up hazards that pose risks to people and the environment and restore these sites for future use.

We found that DOD didn't report complete information to Congress on ongoing environmental activities and costs related to BRAC from 1998-2011. For example, DOD didn't report an estimate of when remaining BRAC sites would be closed or how many sites needed continued funding for long-term monitoring of contaminants.

We recommended that DOD address this issue and more in future reports to Congress.

Testing groundwater for contaminants at the former Camp Breckinridge in Louisville, KY 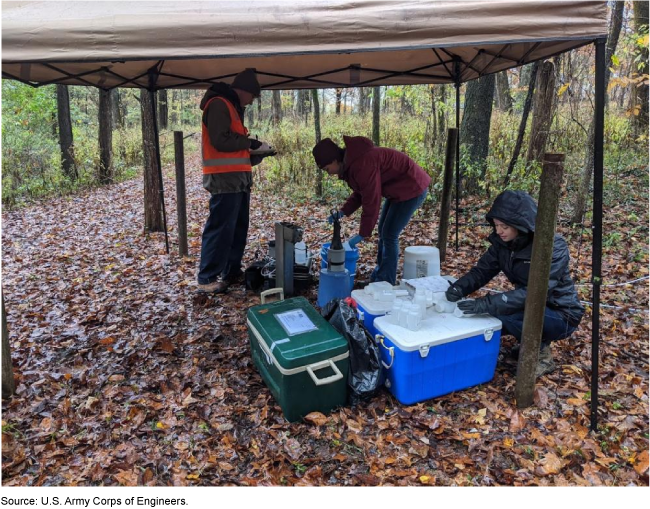 Department of Defense (DOD) expenditures for Base Realignment and Closure (BRAC)-related activities exceeded initial estimates through fiscal year 2020. This was driven in part by environmental restoration costs, which could not be fully captured in initial estimates. According to DOD data, the department has spent in total about $64.5 billion—an increase of $22.8 billion from DOD's initial budget estimate—in funding for BRAC-related activities, as of September 2020. Of this total, DOD spent $14.8 billion on environmental activities and caretaking of BRAC sites and estimated it will need an additional $7 billion. DOD data show it has closed 7,334 (83 percent) of the total BRAC sites. GAO has previously reported that it can be difficult to accurately predict total costs for environmental restoration without completing investigations into levels of contamination in accordance with land reuse plans. Costs may also change due to new laws and increased contaminant levels after follow-on testing.

Base Realignment and Closure Sites Restoration Status as of September 2020

aWhen a site had more than one phase planned or ongoing, we included it in the count for the earliest phase.

DOD reports some future BRAC costs but does not provide complete and transparent information to Congress regarding an end date for all BRAC rounds or details on long-term management costs. DOD's 2019 BRAC report identifies what it calls end dates for each BRAC round; however, these dates are based on when DOD will complete proposed cleanup actions, not on when sites are closed out and no additional funds will be needed. GAO's analysis of DOD data shows that 889 of the remaining 1,486 BRAC sites are in or planned to undergo long-term management in perpetuity (i.e., with no definite end date), as of September 2020. DOD also has internally estimated long-term management costs of $1 billion for these sites. However, DOD did not include the number of such sites or related costs in its 2019 report. By reporting to Congress on when sites will reach site closeout and on the number and associated costs of sites that will require long-term management in perpetuity, DOD would provide Congress greater clarity on BRAC costs.

DOD's estimated annual recurring savings are outdated. The 2019 BRAC report identifies $12 billion in annual savings from the five BRAC rounds, an estimate DOD has previously reported. The report states that the savings amount is an estimate of costs avoided after implementing each round. However, when adjusted for inflation, costs have varied since the initial estimate, potentially offsetting the estimated amount of costs avoided. DOD officials stated they could not justify the resources required to attempt to recalculate the annual recurring savings from BRAC rounds. While investing resources in recalculating potential savings may not be worthwhile, reporting information on the caveats and limitations of the savings estimate would provide Congress greater clarity and insight on the precision and currency of the estimate.

Since 1988, the department has spent billions of dollars to implement BRAC rounds to reduce excess infrastructure and meet changing force structure needs. DOD initiated five BRAC rounds from 1988 through 2005. DOD is legally obligated to restore its properties, including BRAC sites, to a level that protects human health and the environment.

Senate Report 116-48 directed DOD to prepare a report by November 2019 to provide information on the costs and savings for each BRAC round. It also includes a provision for GAO to review DOD's 2019 report and other previous reports related to BRAC. In this report, GAO (1) analyzes how BRAC spending compared to initial estimates, (2) evaluates the extent DOD reported complete and transparent estimates for BRAC future costs and end dates, and (3) evaluates the extent DOD's 2019 BRAC report presented valid findings for realized savings.

GAO examined the information reported to Congress on costs and savings of BRAC, analyzed information from a database on environmental restoration efforts and from a non-generalizable sample of nine bases, and interviewed DOD officials.

GAO is making two recommendations. When reporting to Congress on BRAC, DOD should (1) identify when sites will reach site closeout and the number and costs of sites estimated to remain in long-term management, and (2) explicitly state the caveats and limitations of its savings estimates. DOD concurred with GAO's two recommendations.