DOD's TRICARE program provides health care to over 9 million beneficiaries, including military servicemembers and their dependents. Military populations face challenges, such as spousal deployment, that may place them at increased risk for mental health conditions like depression and anxiety during and after pregnancy.

We found that DOD encourages mental health screenings and offers treatment for such beneficiaries. For example, some military facilities offer mental health services within women's health clinics. This may reduce patients' concerns about stigma because such visits don't show up on a patient's record as mental health visits. 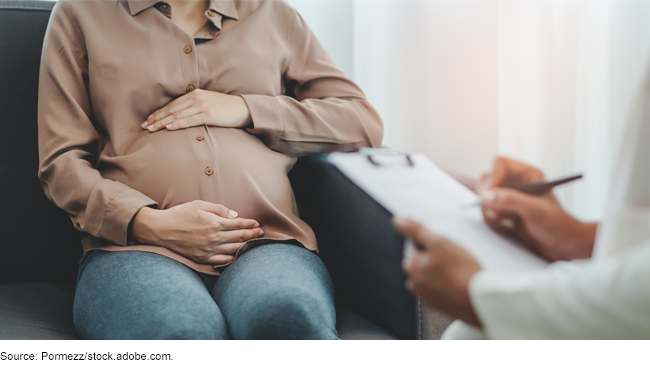 Available data for fiscal years 2017-2019 show that about 36 percent of beneficiaries in the Department of Defense's (DOD) TRICARE program received mental health diagnoses during their perinatal periods. The perinatal period includes the time during pregnancy and through 1 year after. 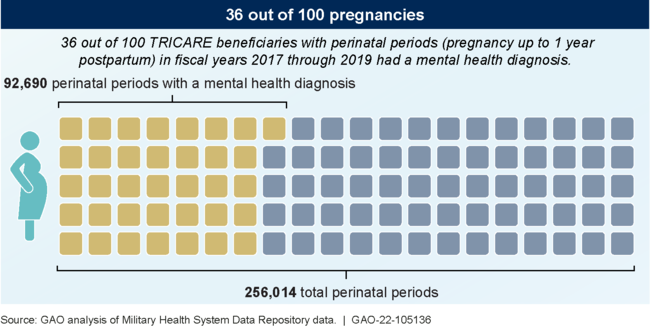 Note: Data set represents 235,283 beneficiaries, some of which had multiple pregnancies during GAO's review period.

GAO's analysis indicated that certain demographics of beneficiaries who either gave birth or lost a pregnancy had higher rates of perinatal mental health diagnoses. These include beneficiaries (servicemembers and dependents) associated with lower military ranks—a proxy for socioeconomic status. The three most common categories of mental health diagnoses in GAO's analysis were anxiety disorders, depressive disorders, and trauma- and stressor-related disorders.

TRICARE provides health care to more than 9 million eligible beneficiaries, including military servicemembers and their dependents through both MTFs and private sector providers. In fiscal year 2020, there were more than 105,000 births among beneficiaries. Due to factors such as isolation from social support networks, TRICARE beneficiaries face unique risk factors for perinatal mental health conditions. Mental health conditions such as depression and anxiety are the most common complication during and after pregnancy in the general population.

The William M. (Mac) Thornberry National Defense Authorization Act for Fiscal Year 2021 includes a provision for GAO to study perinatal mental health conditions among TRICARE beneficiaries. This report describes (1) the prevalence of such conditions in the TRICARE population; and (2) DOD's efforts to screen and treat such conditions.

To do this work, GAO analyzed TRICARE data for pregnancy outcomes (live deliveries and losses) in fiscal years 2017 through 2019, to identify (1) mental health diagnoses during pregnancy or up to 1 year after, and (2) mental health-related prescriptions dispensed and psychological services. These were the most recent available data that included the full postpartum year. GAO also reviewed DOD documents and policies, and interviewed officials from DOD's DHA, obstetric providers from six MTFs (selected for variation in geographic and service locations), five beneficiaries, and other organizations with relevant expertise. GAO also conducted a literature review to identify potential barriers to care.