Military service academies play a key role in shaping leaders for a diverse military. Students can file equal opportunity complaints when issues of discrimination and harassment arise, but incidents not submitted through the complaint processing system aren't always fully captured.

In addition, the academies administer a survey to collect information on the organizational climate, but the results do not always provide complete and reliable information.

The academies have taken some actions to improve the climate, like recognizing the need to recruit more diverse faculty, but need to develop measures to assess the success of their actions. 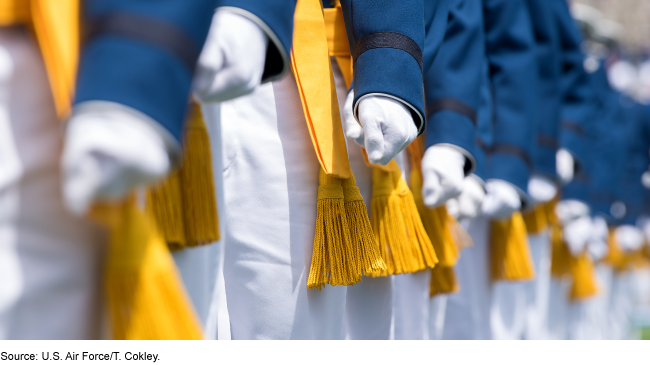 The United States Military Academy, United States Naval Academy, and United States Air Force Academy collect information about their organizational climate using a variety of tools. However, the DOD climate survey—the academies' primary tool for collecting information—does not provide complete and reliable information. Specifically, the survey has methodological issues concerning security, response rates, and post-survey weighting that limit its usability. In addition, while the academies monitor the number and basis of equal opportunity complaints, they do not fully capture information on alleged incidents of discrimination and harassment that are not submitted through the complaint processing system. DOD is taking steps to address methodological issues with its survey, but without addressing alleged incidents that are not submitted through the complaint processing system, the academies will continue to have an incomplete picture of their organizational climate. This will limit the academies' ability to identify problems, implement actions, and measure outcomes.

The service academies have taken actions to improve organizational climate by incorporating leading practices for managing workforce diversity. Specifically, the academies have taken action to demonstrate leadership commitment, employ strategic planning, improve student involvement, and enhance recruitment, among others. For example, between 2019 and 2021, all three academies developed diversity and inclusion strategic plans, and each academy has created or restructured student leadership positions related to diversity and inclusion.

Each academy has plans to measure the effect of its actions aimed at improving climate. However, they are unable to assess their actions' effectiveness because they have not fully developed or implemented performance measures, such as measures to review disciplinary actions for bias. Without such measures, the academies cannot hold accountable those responsible for the actions.

Students at the academies expressed a range of perceptions regarding the academies' organizational climate in 34 GAO-conducted focus groups. For example, while most groups organized by race and ethnicity agreed that the use of offensive terms or slurs is uncommon, these groups differed in their view of how well command officials work with individuals from diverse backgrounds. However, most focus groups agreed that they would recommend the academy to a friend or family member.

According to the Department of Defense, creating an inclusive environment free from harassment and discrimination is a priority. As the military service academies are a major source of officer commissions, accounting for approximately 18 percent of all officer commissions in fiscal year 2019, they play a key role developing officers who will be responsible for leading a diverse military.

The William M. (Mac) Thornberry National Defense Authorization Act for Fiscal Year 2021 included a provision for GAO to report on equal opportunity claims, climate surveys, and programs to address climate issues at the military service academies. Specifically, this report addresses (1) the extent to which the academies collect information to develop a complete picture of the climate; (2) the extent to which the academies have taken actions to improve the climate; and (3) the perceptions of current students concerning the climate.

GAO is making seven recommendations, including that DOD capture information on incidents not submitted through the complaint system and develop performance measures for actions aimed at improving climate. DOD concurred with the recommendations.