If DOD moves forward as planned, it will have bought a third of all F-35s before determining that the aircraft is ready to move into the full-rate production phase.

This report also provides an update on the F-35 modernization effort, which is delayed by 4 years. DOD continues to address related concerns we (and others) have raised. 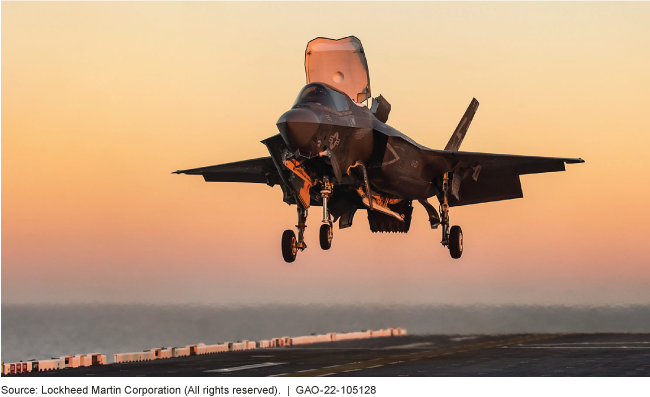 The Department of Defense (DOD) has not yet authorized the F-35 program to begin full-rate production. Full-rate production generally is the point when a program has demonstrated an acceptable level of performance and reliability; and in the case of the F-35, is ready for higher manufacturing rates. The delay in reaching this milestone stems largely from problems and delays developing the F-35 simulator, needed for crucial testing. The program is projected to finalize its schedule in spring 2022. As a result, the date for the full-rate production decision remains undetermined at this time. Despite this delayed decision, DOD is planning on acquiring up to 152 aircraft per year. At that rate, DOD would purchase about one-third of all planned F-35 aircraft before achieving this production milestone, which increases risk. For example, it means that more aircraft will need to be fixed later if more performance issues are identified, which will cost more than if those issues were resolved before those aircraft were produced. At the same time that DOD is purchasing aircraft at these high rates, those that are already in the fleet are not performing as well as expected.

DOD is also 4 years into development of its modernization effort, known as Block 4, which is continuing to experience cost growth and schedule delays. Block 4 costs continued to rise during 2021 due to higher costs associated with upgrading crucial hardware and testing upgrades, among other things. The program office extended Block 4 development and delivery into fiscal year 2029—which is now 3 years beyond the original plan (see figure). To avoid further delays, the program office is taking steps to improve the timeliness and quality of software deliveries, but it is too soon to tell whether these actions will result in improved outcomes for Block 4.

The F-35 program office has changed plans from replacing its logistics system and is now taking incremental steps to improve and modernize it. The Autonomic Logistics Information System (ALIS) has faced long-standing challenges, including technical complexity, poor usability, and inaccurate or missing data. Initially, the F-35 program intended to develop a new system to replace ALIS. However, the program office now plans to make gradual improvements to ALIS and eventually rename it. These planned improvements include smaller hardware and improved program data access. The program has yet to identify a date for when it will consider this transition complete but has mapped out the improvements it intends to make over the next 3 years.

The F-35 Lightning II Joint Strike Fighter program remains DOD's most expensive weapon system program. It is estimated to cost over $1.7 trillion to buy, operate, and sustain. DOD is 4 years into a development effort to modernize the F-35 aircraft's capabilities. An important element to operating and maintaining the F-35 is a complex logistics system called ALIS. In 2020, DOD began an effort to improve ALIS after years of concerns regarding its performance. Congress included provisions in two statutes for GAO to review the F-35 program.

This report (1) identifies the F-35's progress towards full-rate production, (2) addresses the program's progress and improvements towards developing, testing, and delivering modernization capabilities, and (3) describes DOD's plan for improving its logistics system. To assess progress for the F-35 and its modernization program, GAO compared the cost and schedule targets in the original development program documentation to the most recent data available. GAO also reviewed DOD and contractor documentation and interviewed DOD officials and contractor representatives.

Since 2001, GAO has made a number of recommendations to DOD to improve aspects of the acquisition of F-35 aircraft. In 2020, GAO recommended DOD develop a strategy for its logistics system redesign. In 2021, GAO made 3 recommendations aimed at improving Block 4. DOD concurred with these recommendations and has addressed or is taking steps to address them.