The U.S. military is developing a new GPS signal called M-code that resists interference—i.e., jamming. DOD plans to install this technology on hundreds of weapons systems—but are the systems ready to use it?

DOD is working to enable the systems to use M-code and is using a database to track its progress. But the information DOD includes in the database, such as timeframes and budget data, is incomplete or inaccurate. This makes it hard for the military to plan equipment tests and make decisions about how and when M-code will be deployed.

We recommended that DOD improve the information in its database and finalize its testing plans. 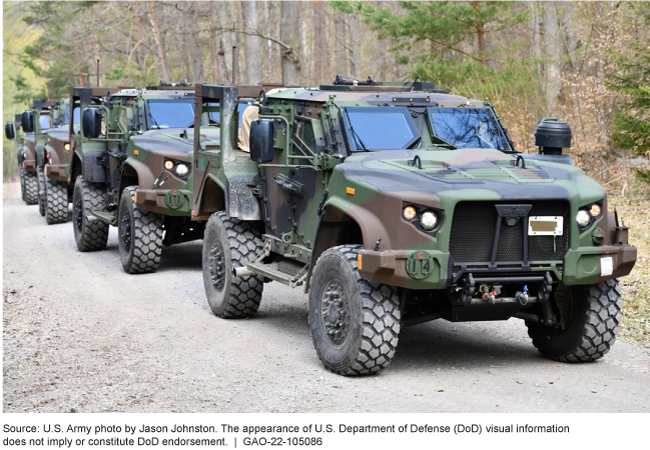 The Department of Defense (DOD) has been modernizing GPS to use a more jam-resistant, military-specific signal called M-code for more than 2 decades. The Space Force is nearing a key GPS milestone—a constellation of 24 satellites broadcasting the signal. However, while the ground segment that controls the signal will be available in 2023, widespread operational use will take several more years, due to developmental challenges and delays with the user equipment that will receive the signal. DOD's strategy is to test this equipment in lead weapon systems including aircraft, ships, and combat vehicles. DOD has begun to select priority systems for M-code capability, but incomplete data have hindered these efforts. Based on a classified military scenario, DOD selected over 50 systems that will get M-code capability first (see figure). Eventually, DOD plans to incorporate modernized GPS equipment in about 700 weapon systems.

Notional Representation of Services' Weapon Systems for Fielding with M-code 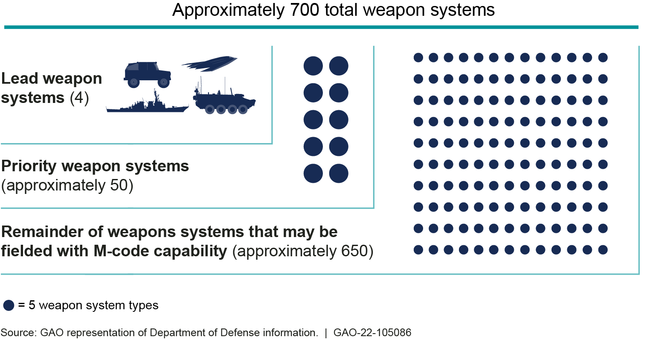 DOD maintains a database on modernizing the GPS enterprise—including the types and numbers of GPS receivers that systems will use, projected budget amounts, and time frames. The military services enter the required data. Until mid-2021, the database did not have a field to identify priority systems. Significant issues with data completeness and accuracy remain, in part due to user equipment delays, but also because the database does not have formal data validation. Poor data hinder the congressional defense committees' ability to track the progress of M-code and support DOD decision-making.

User equipment delays have also had ripple effects on DOD's ability to plan for and develop M-code-capable receivers. These delays have limited the military services' ability to fully develop plans for operationally testing the M-code capability; they cannot do so without firm dates for availability of user equipment. Testing will be complex and, once equipment is ready, the services will need sufficient test data to support fielding decisions and user understanding of capabilities. Delays to test plans place timely fielding of M-code capability on priority systems at risk.

The Air Force launched the first GPS satellite capable of broadcasting the jam-resistant M-code signal in 2005. However, delays have plagued the ground and user equipment segments needed to take advantage of the technology.

The Senate Report accompanying the National Defense Authorization Act for Fiscal Year 2020 included a provision for GAO to report on the status of GPS modernization. This report assesses, among other things, the extent to which DOD has identified systems to field with M-code-capable equipment, and its plans for the procurement, installation, and fielding of this equipment. GAO reviewed DOD's plans for GPS and DOD's data repository on GPS modernization, and interviewed DOD officials.

GAO is making seven recommendations to DOD, including that DOD and the military services ensure information in their GPS modernization database is sufficient to support priorities for planning for and fielding M-code, and that they validate this information regularly. GAO also recommends that the military services finalize operational test plans for priority weapon systems once M-code equipment is available. DOD concurred with three recommendations and partially concurred with the remaining four. In keeping with the findings in this report, GAO updated those recommendations based on suggestions DOD provided.