In the near future, "Advanced Air Mobility" services could fill the skies with small, highly-automated, electric aircraft that can take off and land vertically. Carrying people or cargo, these aircraft could reduce congestion, provide lifesaving medical transportation, and more.

What would it take to make this a reality? Stakeholders described several steps, including: 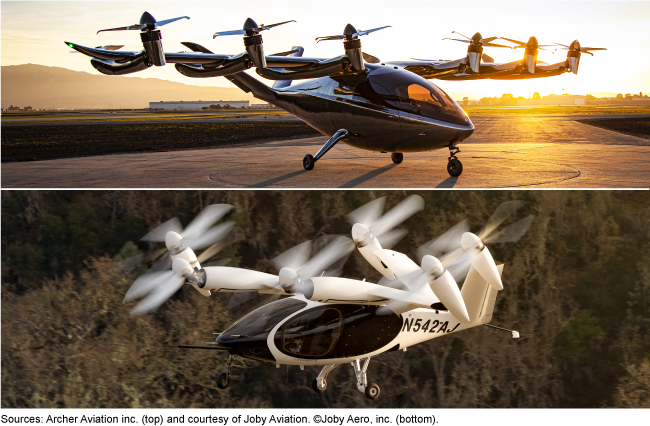 Small electrically powered aircraft that can take off and land vertically may soon transform the aviation market with services known as “Advanced Air Mobility” (AAM). Thirty-six stakeholders GAO interviewed described a number of issues that will need to be addressed by industry and the federal government before AAM operations can be widely implemented. Such issues include:

Stakeholders also described several challenges related to the workforce needed to make the AAM industry viable. For example, pilots and maintenance technicians will have to be trained in new skills related to automation and electric propulsion. Such training would require investment in new standards and curriculums. Some stakeholders cautioned that schools may be reluctant to make such investments until AAM aircraft designs, and related federal standards are more certain. Some stakeholders also said the AAM industry could face workforce supply issues similar to those faced by the broader aerospace industry, which has struggled in recent years to recruit and retain workers. Factors affecting supply include high educational costs, a lack of workplace diversity, inadequate awareness of opportunities, and limited training capacity, according to stakeholders GAO interviewed.

Stakeholders said the pace at which the AAM industry develops will depend on how fast the industry and government address these various issues. Many forecasted the industry would begin limited operations within the next 5 years. The stakeholders suggested the scale of operations in 10 years would depend on addressing certification, and other issues, and identifying profitable markets.

Proponents of AAM have said that services using small electrically powered aircraft that can take off and land vertically could reduce urban congestion, speed cargo delivery, and provide lifesaving medical transportation. AAM would do so by using aircraft that are intended to be simpler to design and construct, easier to fly, quieter, and less expensive to operate than traditional aircraft. However, industry stakeholders and Members of Congress have raised questions about realizing AAM's implementation, particularly in an aerospace sector that already struggles to attract and retain personnel.

The explanatory statement to the Consolidated Appropriations Act, 2021, included a provision for GAO to examine the AAM industry's workforce needs. This report describes stakeholders' views on: (1) issues in implementing widespread AAM operations; (2) challenges in developing a skilled AAM industry workforce, and (3) projected timeframes for development of the AAM industry.

GAO reviewed documents and interviewed officials from FAA, the National Aeronautics and Space Administration, and the Air Force on efforts to develop AAM operations and the industry's workforce. Further, GAO interviewed a non-generalizable sample of 36 stakeholders including AAM companies, trade organizations, standards bodies, colleges and universities, state and local governments, and organizations that represent aerospace workers on these issues.

How Long Until A New Advanced Aviation Industry Takes Flight?