The Department of Defense has support programs for military families with children with disabilities in K-12 schools. For example, school liaisons help families navigate special education and other services.

Through 2 programs, DOD provides funding to school districts that serve substantial numbers of military-dependent students. One program supplements a district's general funds—with no requirements on how the money is spent. The other program provides funds to support military-dependent children with severe disabilities. School districts must apply for the funds and student eligibility for this program varies by state. 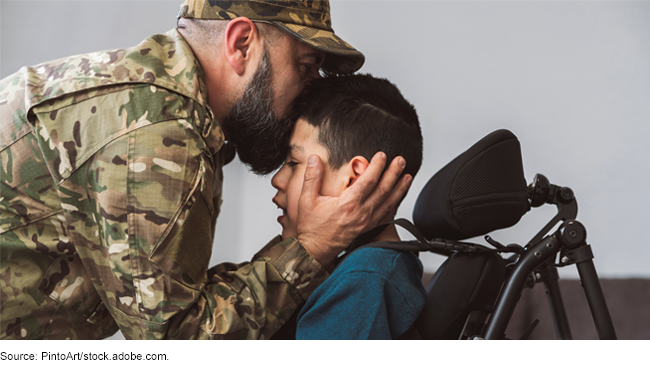 A variety of Department of Defense (DOD) programs support military families who have children with disabilities in preK-12 schools. School Liaisons are the primary contacts for military families with preK-12 students who seek support, including special education issues. Four DOD officials told GAO that it is challenging to connect with families who are unaware of School Liaison services. DOD recently implemented an agency-wide communications plan, including the use of social media, to highlight the School Liaison program (see figure). Also, in response to recent congressional direction, all four armed services expanded special education legal support available to families having children with disabilities.

Note: DOD refers to Military OneSource as its “24/7 gateway to trusted information, resources, and confidential help.”

Children in U.S. military families may transfer schools nine times, on average, before they graduate from high school. These moves may be especially challenging for children with disabilities and their families, as special education services provided under the Individuals with Disabilities Education Act—the primary federal special education law—must be re-established with each new school. Sections 589G and 589H of the William M. (Mac) Thornberry National Defense Authorization Act (NDAA) for Fiscal Year 2021 include provisions for GAO to examine and report on a range of military children's education issues.