Legislation set up an independent authority (FirstNet) to create a nationwide broadband network for first responders, such as police officers and firefighters. FirstNet contracted with AT&T to deploy the network, which will be fully operational in 2023.

But this law terminates FirstNet's authority in 2027, and doesn't identify another federal agency to oversee network operations or updates. Without legislative action, the public-safety network will be at risk and first responders could lose service.

Congress should consider reauthorizing FirstNet before the 2027 end date to ensure network continuity.

University researchers in Texas use FirstNet to test emergency communication services in a disaster training exercise. 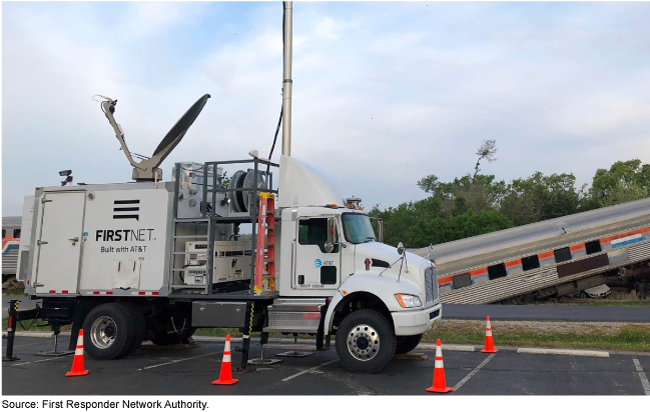 The First Responder Network Authority (FirstNet) is responsible for establishing a nationwide public-safety broadband network. GAO identified four key statutory requirements and contract responsibilities currently performed by FirstNet that the Congress should address before FirstNet would sunset in 2027. For example, FirstNet oversees the network contract awarded to AT&T in 2017 (see figure). The current statute does not identify another federal entity to assume oversight when FirstNet sunsets. Without any legislative action, network operations and improvements would be at risk and could result in the loss of service for public-safety users. Another example is FirstNet's responsibility to collect fees and to reinvest these funds to enhance the network. FirstNet expects to collect and reinvest $18 billion in fees from AT&T over the 25-year duration of the contract with AT&T. However, the statute does not identify an organization to assume responsibility for fee collection and reinvestment if FirstNet's authority is terminated. Congressional action on key statutory requirements and contract responsibilities is essential for network continuity and enhancement.

GAO's 2020 report on FirstNet's deployment of the network reinforces the importance of addressing contract oversight. In that report, GAO determined that FirstNet used various mechanisms to oversee AT&T, many of which aligned with key contract-oversight practices. However, the report also pointed out that FirstNet lacked: (1) a reliable master schedule to review, (2) communication with relevant stakeholders regarding contract oversight, and (3) meaningful information on end users' satisfaction to gauge performance quality. GAO made four recommendations to remedy these weaknesses; FirstNet concurred with the recommendations and to date has implemented two of them. Implementing the remaining two on a reliable schedule and communication with stakeholders would further strengthen oversight.

Two options to address FirstNet's termination of authority in 2027 include reauthorizing FirstNet or transferring FirstNet's responsibilities to one or more other agencies. If the Congress were to decide to reauthorize, then it would also have options in where to put FirstNet: (1) keep it within the National Telecommunications and Information Administration (NTIA), (2) place it within another federal agency, or (3) establish it as a separate federal organizational entity.

Each of the overall options has different operational implications and potential costs. For example, some public-safety stakeholders told GAO that reauthorizing FirstNet would prevent network disruption; FirstNet officials agreed and further added that this option would not introduce new costs. Further, such a reauthorization would enable retention of existing network expertise and experience in engaging with the public-safety community. By contrast, the option to transfer responsibilities to one or more other agencies may lead to additional contract costs and introduce new risks. For example, stakeholders noted that transitioning oversight to another agency or agencies could be problematic for contract oversight, requiring more coordination and potentially leading to inefficiencies.

Regarding FirstNet's organizational placement if reauthorized by Congress, advantages and disadvantages of each option would vary:

Communication systems are essential for first responders in emergencies. In 2012, FirstNet was established by statute as an independent authority within the Department of Commerce's National Telecommunications and Information Administration. FirstNet was charged with establishing a nationwide broadband network for use by public-safety entities. In March 2017, FirstNet awarded a $6.5 billion contract to AT&T to deploy the network, which is currently expected to reach its final operating capability in March 2023.

The statute creating FirstNet included provisions for its authority to terminate in 2027 and for GAO to report on what actions the Congress should consider regarding this sunset. This report examines: (1) FirstNet's statutory requirements and contract responsibilities that Congress should consider before FirstNet's authority sunsets in 2027 and (2) options to oversee and manage the network when FirstNet's authority sunsets and the associated operational implications and potential costs.

GAO reviewed relevant statutes and documents, including FirstNet's contract with AT&T, and reviewed GAO's prior relevant reports. GAO also interviewed FirstNet and other government officials and a nongeneralizable selection of public-safety stakeholders.

The Congress should consider reauthorizing FirstNet and ensure that key statutory and contract responsibilities are addressed before the 2027 sunset. In doing so, it can consider organizational options.