The government spends billions on services every year (such as consulting and engineering services) using various types of contracts. We looked at the government's use of two contract types that are considered higher-risk because contractors bill by the hour. With hourly billing, contractors could conceivably work less efficiently in order to charge more hours.

From FYs 2017-2021, the government spent $139 billion on these contracts. We found agencies sometimes used these contracts when they could have switched to other, lower-risk types. We recommended that agencies look at ways to use other types of contracts. 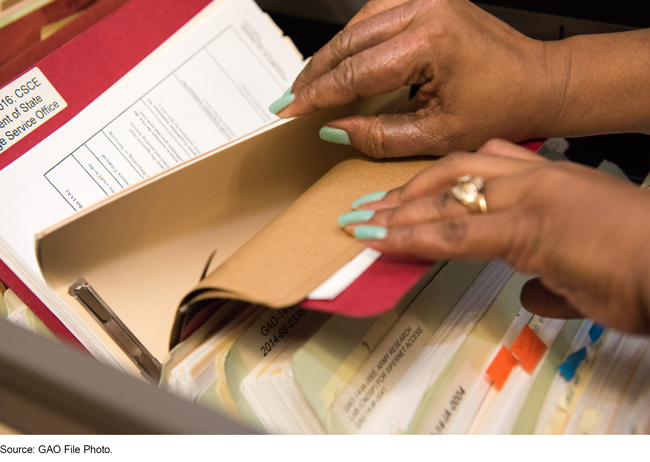 When the government buys services, such as engineering or consulting services, contracting officers try to use a contract type that provides the right balance of risk and flexibility. As GAO previously reported, time-and-materials and labor-hour contracts (collectively referred to here as T&M contracts) are considered riskier since contractors bill the government by the hour and could conceivably work less efficiently so that they could charge more hours. GAO found that civilian agencies use T&M contracts more often than defense agencies. For fiscal years 2017 through 2021, about 11 percent of civilian agencies' contract obligations were for T&M contracts, compared to just 1 percent of Department of Defense (DOD) obligations (see figure). 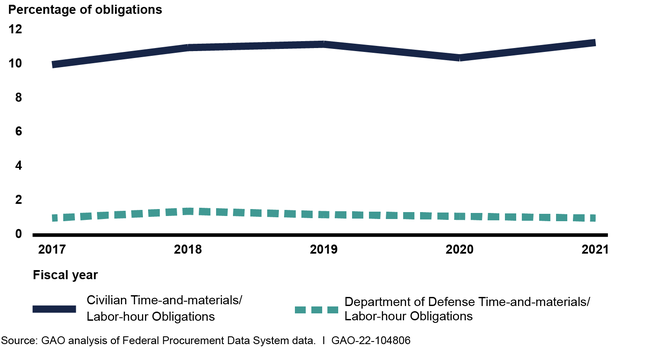 Contract documents GAO reviewed identified uncertain requirements—such as unpredictable mission needs—as a primary reason for using T&M contracts, which is consistent with federal regulations on use of T&M contracts.

To reduce risk, federal regulations encourage assessing T&M contracts periodically, such as when enough knowledge is available to convert portions or all of the work to a fixed price. GAO found instances of contracting officials finding opportunities to convert portions of their requirements to firm-fixed-pricing by identifying repetitive tasks or tasks with stable labor hours. GAO also found that some agencies—such as the Army and the Department of Homeland Security—have taken steps to ensure that they consistently take advantage of these opportunities. For instance, an Army command established a process that prompts contracting officers and their customers to consider if aspects of the work are sufficiently predictable for firm-fixed-pricing. In contrast, GAO found that some agencies, including the Air Force, the Department of State, and Social Security Administration, did not have additional efforts in place to identify similar opportunities, and increased their use of T&M contracts over the period GAO reviewed. Without increased leadership attention, these agencies may miss opportunities to use lower-risk contract types.

The government buys services with a variety of different contract types, with varying risks and benefits. From fiscal years 2017 to 2021, the government obligated $139 billion on time-and-materials contracts. Prior GAO work highlighted the risks associated with these contract types, which lack incentives for contractors to control costs or use labor efficiently.

GAO analyzed federal procurement data from 5 prior fiscal years and identified four defense and three civilian agencies with higher obligations on T&M contracts. From these seven agencies, GAO selected a non-generalizable sample of 21 T&M contracts awarded in fiscal year 2020—the most recent data available when it conducted this analysis—reviewed contract documents, and interviewed contracting and policy officials.