We found that DOD's efforts to acquire AI come with some challenges that DOD usually faces, such as DOD's long acquisition processes and shortages of skilled staff, as well as AI-specific challenges like having enough usable data to train the AI. For example, AI for detecting an adversary's submarines requires gathering many images of various submarines and labeling them so the AI can learn to identify one on its own.

DOD has initiated efforts to address such challenges, but it is too soon to assess their effectiveness. 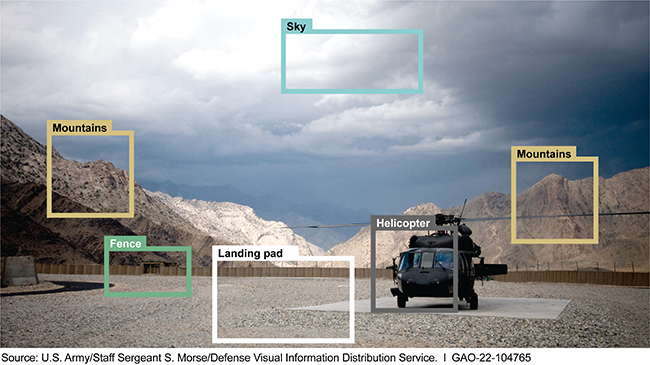 The Department of Defense (DOD) is actively pursuing artificial intelligence (AI) capabilities. AI refers to computer systems designed to replicate a range of human functions and continually get better at their assigned tasks. GAO previously identified three waves or types of AI, shown below. 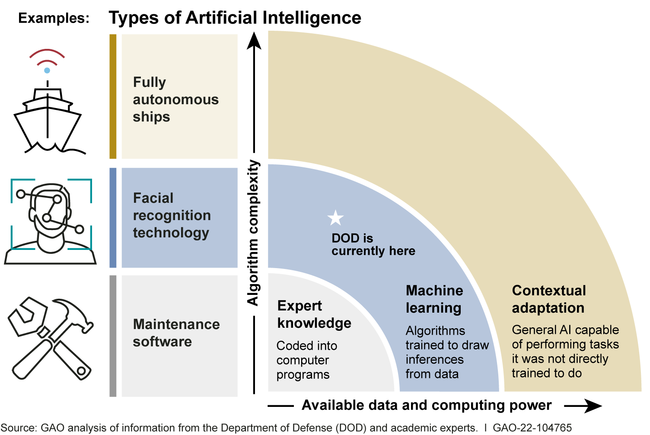 DOD recognizes that developing and using AI differs from traditional software. Traditional software is programmed to perform tasks based on static instructions, whereas AI is programmed to learn to improve at its given tasks. This requires large data sets, computing power, and continuous monitoring to ensure the capability performs as intended. The majority of AI capabilities that support DOD's warfighting mission are still in development. These capabilities largely focus on analyzing intelligence, enhancing weapon system platforms such as aircraft and ships that do not require human operators, and providing recommendations on the battlefield (such as where to move troops).

When acquiring new capabilities that depend on complex software, DOD has historically faced challenges, such as long acquisition processes and a shortage of skilled workers. GAO found that it continues to face these challenges along with others specific to AI, including having usable data available to train the AI. For example, AI for detecting an adversary's submarines requires gathering many images of various submarines and labeling them so the AI can learn to identify one on its own. DOD also faces difficulties integrating trained AI into existing weapon systems that were not designed for it and building trust in AI among its personnel. DOD initiated a variety of efforts—such as establishing a cross-service digital platform for AI and AI-specific trainings—to address these challenges and support its pursuit of AI, but it is too soon to assess effectiveness.

DOD has reported that AI is poised to change future battlefields and the pace of threats the U.S. faces. AI capabilities could enable machines to perform tasks that usually require human intelligence, such as identifying potential threats or targets on the battlefield. DOD designated AI a top modernization area and is investing heavily in AI tools and capabilities. Other nations are making significant investments in this area that threaten to erode the U.S. military technological and operational advantage.

The National Security Commission on Artificial Intelligence concluded in its March 2021 report that the U.S. needs to act quickly to ensure AI readiness. AI experts from inside and outside DOD agree that ensuring the department has the necessary infrastructure in place will be essential to developing, acquiring, and scaling AI for weapon systems effectively.

Senate Report 116-236 includes a provision for GAO to review DOD's AI warfighting acquisition-related efforts. This report examines (1) the unique nature of AI and current status of AI capabilities that support weapon systems, and (2) how DOD is addressing challenges in developing, acquiring, and deploying AI capabilities for weapon systems.

To do this work, GAO interviewed officials from over 20 DOD entities and reviewed DOD documentation as well as reports and recommendations from the National Security Commission on Artificial Intelligence, among others.