During the 2020-21 school year, more than a third of students (about 18.5 million) attended schools where 75% or more students were of a single race or ethnicity. Because district boundaries often determine which school a student can attend, school district boundaries can contribute to continued division along racial/ethnic lines.

We also found that new school districts that seceded from existing districts usually had higher percentages of white and Asian students than districts they left.

Percent of Schools That Are Predominantly (75% or more) Same-Race/Ethnicity, by Region, in School Year 2020-21 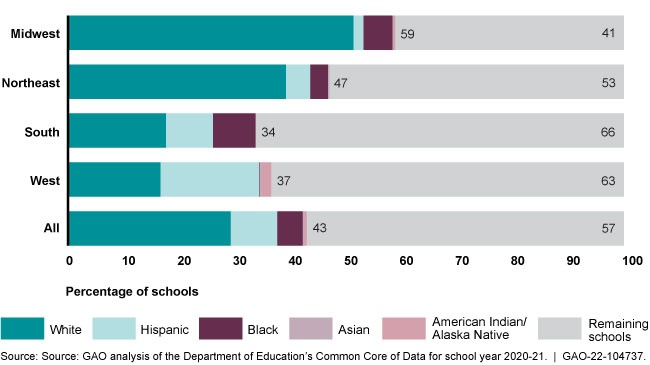 As the K-12 public school student population grows significantly more diverse, schools remain divided along racial, ethnic, and economic lines throughout the U.S. These divisions span school types, regions, and community types (urban, suburban, and rural). More than a third of students (about 18.5 million) attended a predominantly same-race/ethnicity school—where 75 percent or more of the student population is of a single race/ethnicity—according to GAO's analysis of Department of Education data for school year 2020-21. GAO also found that 14 percent of students attended schools where 90 percent or more of the students were of a single race/ethnicity.

It is widely recognized that a history of discriminatory practices has contributed to inequities in education, intertwined with disparities in wealth, income, and housing. Because district boundaries typically define the schools a student can attend and public education is partially funded by local property tax revenues, lower-income communities generally have fewer resources available for schools. For example, GAO previously reported that students who are poor, Black, and Hispanic generally attend schools with fewer resources and worse outcomes.

To determine the extent of divisions along racial, ethnic, and economic lines in schools, GAO analyzed demographic data from Education's Common Core of Data by school type, region, and community type, covering school years 2014-15 to 2020-21, the most recent available data since GAO last reported on this topic in 2016.

To identify the number and location of districts that seceded from school year 2009-10 through 2019-20, GAO analyzed and compared school district data from the Common Core of Data for the new and remaining districts in the year after secession to identify and describe any differences in demographic and socioeconomic characteristics.

Back to School for K-12 students: Issues Ahead

As students and teachers head back to the classroom this fall, they are likely to face a number of...
Chuck Young
Managing Director
youngc1@gao.gov
(202) 512-4800
Education
CensusHispanic AmericansMagnet schoolsPublic schoolsRacial and ethnic groupsSchool districtsSchoolsStudentsTeachersCharter schools