In the summer of 2020, the Department of Health and Human Services began a $265 million campaign to promote COVID-19 prevention and encourage vaccine acceptance. HHS made awards to two consulting firms for this effort.

Congressional committees raised concerns that CDC funding was used for this campaign, and also questioned its timing given the upcoming election. HHS then reviewed the awards and terminated one.

This report examines how the campaign was funded, the efforts to ensure that campaign materials aligned with public health recommendations, and more. 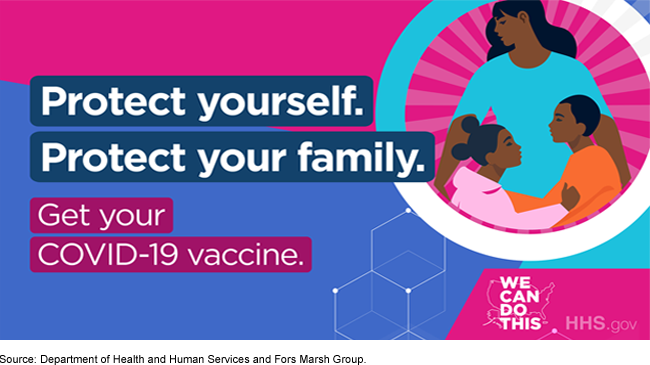 In the summer of 2020, the Office of the Assistant Secretary for Public Affairs (ASPA) within the Department of Health and Human Services (HHS) worked with procurement offices within the Food and Drug Administration (FDA) and the National Institutes of Health (NIH) to solicit proposals and make awards to two firms in support of a COVID-19 public education campaign. The primary goals of the campaign, according to award documents, were sharing information on preventing the spread of COVID-19 and increasing vaccine acceptance. ASPA officials developed and led the campaign, while FDA and NIH staff oversaw the technical aspects of the contracting process.

HHS's We Can Do This Web Page

ASPA paid for the two awards and other campaign costs with COVID-19 relief funds appropriated for the Centers for Disease Control and Prevention (CDC). Specifically, CDC and ASPA entered into a $300 million interagency agreement, initially funded with $100 million from the CARES Act and $200 million from the Paycheck Protection Program and Health Care Enhancement Act. HHS budget officials reported that the department subsequently identified a more appropriate funding source, and CDC adjusted its budget accounts to use only its CARES Act funds for the $300 million interagency agreement with ASPA.

In response to the COVID-19 pandemic, HHS began a national public education campaign led by ASPA. Congressional committees and the media raised questions about the focus and timing of the campaign. There were also concerns that funds meant for CDC were used to pay for the effort.

The CARES Act includes a provision for GAO to report on the federal response to the pandemic. In addition, GAO was asked to conduct a review of the award process for the COVID-19 public education campaign, as well as its source of funding.

This report describes, among other issues: ASPA, FDA, and NIH's roles in executing the COVID-19 public education campaign, and how ASPA paid for the campaign awards.

To conduct this work, GAO reviewed and analyzed inter-agency agreements, award files, related funding documents, and the products developed for the public education campaign; federal statutes and regulations; applicable agency guidance; and agency email communications about the campaign. GAO also interviewed relevant agency officials and contractors, and received written answers to questions regarding the funding used for the campaign.

GAO provided a draft of this report to HHS for review and comment. HHS stated that it appreciated the opportunity to review the draft, and had no comments.